#1 – We have TWO members on the Senate Intelligence Committee. Call both of them.

While 7 of our senators were diverting attention with their humiliating waste-of-time/money trip to Russia, Senator Burr (G-TX), head of the Senate Intelligence Committee snuck out a report right before the holiday stating, that yes, the original reports on Russia’s interference in our election were correct.  Not only did Russia do it, but they pose a significant threat to any subsequent elections. If your senator is on this committee, call them.

END_OF_DOCUMENT_TOKEN_TO_BE_REPLACED

2. Take back the Senate. If we accomplish that first step, that will extend the fight past November. But that’s not enough. In order to actually win this fight, we have to retake the Senate, otherwise Trump will just appoint an extremist after the election. Democrats need to hold all of their seats and PICK UP TWO MORE SEATS. There are 5 pickup opportunities this year:

What to expect in the Senate

END_OF_DOCUMENT_TOKEN_TO_BE_REPLACED

Lego welcomes the women of NASA.

The kids are alright.

First, let’s talk about this 11 year-old girl who’s been worried about the Flint water situation since she’s been 9. Along with playing piano, swimming, fencing and taking dance lessons, she has invented the cheapest, most effective test for lead in water and won “America’s Top Young Scientist”. God, what was I doing when I was 11?

Then there’s Ames Mayfield, who in 14 years or so, will be running for office. Put in on your calendars now. 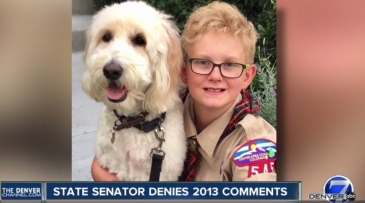 END_OF_DOCUMENT_TOKEN_TO_BE_REPLACED

It’s pretty clear we’re not going to be changing any of Trump’s hard-core supporters. The only way we’re going to win elections and protect gains we’ve made in civil rights is through finding new voters and energizing those who’ve already registered but rarely, if ever, vote.

The good news! – There are way more of us than the MAGA-hat tribe.

What we need to work on – We just don’t show up in high enough numbers.

The stakes are really high now.

We can see our protections being eroded by the current administration. It’s affecting every aspect of our lives and much that we hold dear. Environmental protections, civil worker, immigration, women’s and LGBTQ rights, and access to healthcare and education, are all in the process of being diminished.

What we may not be aware of is that we’re one state away from a constitutional convention, something right-wing groups will been waiting for a long time.  This would allow them to fundamentally change our constitution by amendment. END_OF_DOCUMENT_TOKEN_TO_BE_REPLACED

It is important for us to show our MoCs our gratitude and support.  When doing so, the preferred method of contact is via postcard.

Steve Bannon has been removed from the National Security Council fulfilling our collective dreams when we made phone calls to our congresswoman!

Devin Nunes will step aside from leading the investigation into Trump’s ties with Russia. (He’s now officially under an ethics investigation himself.) Was there a call to action on our part? Why, yes, there was! Great job everyone!

Next up – Bill O’Reilly! More than 40 companies pulled their ads from The O’Reilly Factor, following sexual harassment accusations. Sleeping Giants, who have worked diligently to have advertisers remove their presence on Breitbart, is now working on getting advertisers to stop advertising on Fox News during Bill O’Reilly’s show.  Keep up the pressure! Here is their current list that is being updated

And in case you missed it:

A Kentucky judge ruled that a lawsuit accusing Trump of inciting violence can proceed, dismissing his free speech defense. According to the judge, Trump’s remarks against protesters at a campaign rally “at least ‘implicitly encouraged the use of violence or lawless action.’”

On Monday evening, Senate Bill 54, the “sanctuary state” bill, or CA Values Act, was passed. The bill will now go to the State Assembly, and if approved, to Governor Brown. Take some time to “happy dance,”because our phone calls began a process that will make a HUGE difference in so many lives!

Flood Feinstein! Call all day! 36 Democrats have committed to filibustering Gorsuch. Senator Feinstein is not yet among them.

The US Senate Judiciary Committee will meet Monday, April 3, to consider Neil Gorsuch’s Supreme Court nomination. Republicans need eight Democrats to join them to end the expected filibuster by invoking cloture. As of this writing, only one of our senators, Kamala Harris, has indicated she is a firm “no” on Gorsuch. Senator Dianne Feinstein told reporters on March 27, “…let’s wait for next week, OK? And then I’ll make myself very clear.”

Script: I’m calling from (ZIP) to ask Senator Feinstein to FILIBUSTER Neil Gorsuch. He is the face of corporations and billionaires who want to deform our civil rights for generations. Senator Feinstein: filibuster for our rights! Insist that his confirmation pass the 60-vote threshold!

In his hearings, Gorsuch has demonstrated that he’d use the Supreme Court to defend the interests of the wealthy, powerful and religiously intolerant. Democrats intend to filibuster Gorsuch’s nomination, but that is not enough – our Senators have to commit to voting against “cloture.” The cloture vote ends a filibuster, and it requires 60 votes.

Script: I’m calling from [zip] to ask Senator [Feinstein/Harris] to vote against cloture for Neil Gorsuch. He blatantly favors corporations and the religious right.

After FBI Director Comey’s testimony before the House the legitimacy of Trump’s presidency and his entire administration is in question. With so much yet unknown about the administration’s dealings with the Russians, Congress cannot consider the lifetime appointment of Neil Gorsuch to the Supreme Court.

That’s why it’s imperative that the Senate heed Senator Chuck Schumer’s call to stop Supreme Court confirmation hearings—until a full and independent investigation has been conducted.

Script: Hi my name is ________ and my zip code is ________. I want to urge Senator ____________to stand with Minority Leader Chuck Schumer and block Trump’s nominee of Neil Gorsuch to the Supreme Court until there has been a thorough and independent investigation of the administration’s ties to Russia. Beyond the GOP’s unprecedented blockade of Merrick Garland, we can’t be sure the current administration is legitimate. Democrats need to defend the Court and America by refusing to confer a lifetime appointment to the Court until the administration has been proven legitimate.

On Monday, FBI Director James Comey confirmed that they’ve been investigating ties between Trump’s campaign and Russia since July of 2016.

We cannot allow Trump to make a lifetime appointment to the Supreme Court until we are confident that Russia did not tamper with our election. Our senators must filibuster Gorsuch until the Russian investigation is completed.

Protesting safely during a pandemic of disease and over-policing

July 16 –  GET YOUR POSTCARDS IN THE MAIL AND WRITE THEM OUT AT HOME Third Thursday – pizza, camaraderie, and postcards! Can’t make it? Help fund this event

August 5 – Online: Ventura Community Forum on  the intersection of race and law enforcement

August 20 –  GET YOUR POSTCARDS IN THE MAIL AND WRITE THEM OUT AT HOME Third Thursday – pizza, camaraderie, and postcards! Can’t make it? Help fund this event