(Extra credit: If you want to help change what’s happening in politics now, skip 20 minutes of trading Facebook posts and do this instead. Resistance from your couch is a actually a thing! Update from Indivisible: “As of today, more than 500 Indivisible volunteers have officially made 250,000 Hubdialer calls to friendly voters in key states and connected them with their Republican senators on impeachment. We’re setting up to make more than 1 million calls.” (You can also write letters and postcards for elections in Virginia and Kentucky!)

Embed from Getty Images
(Letter from Jim Hines – Sierra Club, Los Padres Chapter)
Good Morning Friends:
It is a warm beautiful Autumn day on the North Rim of the Grand Canyon, trees are turning Autumn colors, birds chirp , a deer herd browses and all is serene and quiet, but serene and quiet not for long.
An application has been filed with the U.S. Secretary of the Interior to allow for a number of uranium mines to go into production on the north rim of the Grand Canyon this coming Spring, violating one of America’s most sacred natural shrines, the Grand Canyon. The stage is set and the saga to save the Grand Canyon from uranium mining started four years ago when President Obama signed an executive order banning any type of mining in and around the Grand Canyon, last year President Trump signed a order lifting that ban. And now we are before congress.
We have countered the mine application request with our own application to congress which has been turned into a congressional bill  (HR 1373, introduced by our good friend congressman Raul Grijalva D-Arizona) to give permanent protection to the Grand Canyon and not allow the mines. HR 1373 will be voted on by the full House Committee on Natural Resources on October 30th.
Ask committee members to vote YES on HR 1373. Sharing any of your personal experiences about visits to the Grand Canyon and what would be lost to YOU if uranium mining is allowed, is the most positive way to express yourself I have found from by my many meetings with members of congress, both Democratic and Republican.
Once you destroy the Grand Canyon you cannot just go down to the local home improvement store and buy some bricks and mortar and put the Grand Canyon all back together.
My first experience at the Grand Canyon began in awe of the vastness and wildness of the Grand Canyon as I looked out across the vast vista of the canyon from the South Rim lookout point with my parents when I was 9 years old. I have many trips since to the Grand Canyon and have hiked rim to rim of the canyon. twice. What a place, what a experience and just think that all of that could be lost to the American people forever.
#keepitgrand
for a Grand Canyon beautiful and majestic forever,
Jim

HR 1373 – The Grand Canyon Centennial Protection Act would make the 2012 temporary ban permanent, which would eliminate speculative mining claims that mining companies and individuals have staked on public lands without having made a valid discovery of minerals. As of February 2018, there were over 800 active mining claims in the ban area. The Act would also prevent companies and individuals from staking new claims, although prior claims with valid existing rights could be developed. 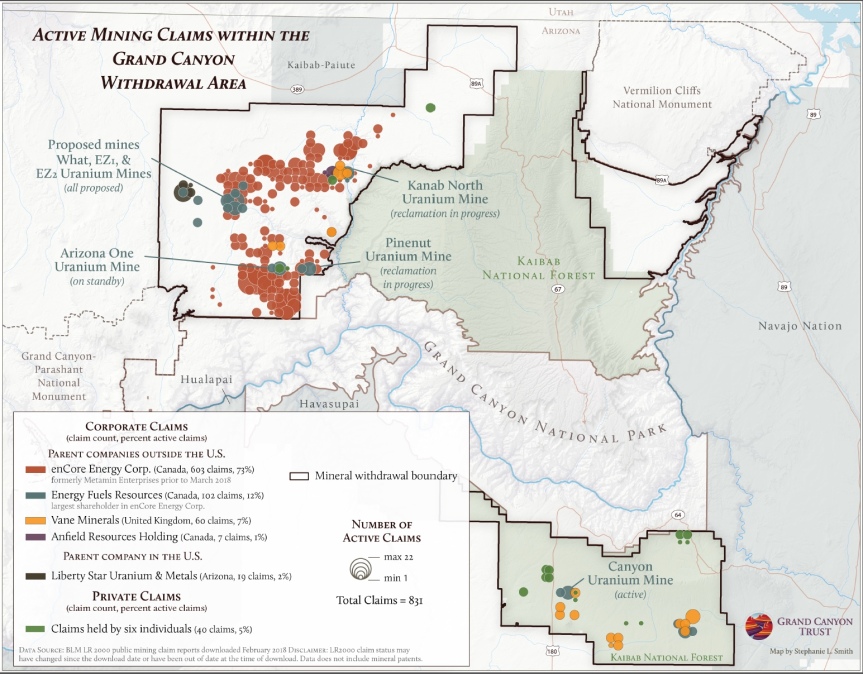 Then – call your legislators!

Have they cosponsored this bill yet? (Carbajal has. Thank him. Where is Brownley?)

Action #2:  Please watch this short video on mining at the Grand Canyon and take our easy quiz…

Question: The president of Canyon Mining Company says it’s not worth mining for less than $50 a pound. If the market ever reaches that magic number, how much of that money do you think he’s going to set aside for:

Answer: Based on precedent, many mining companies will shut down or run out of money. Then, we pay. Even when companies pay some of the costs, we still pay. It will probably be cheaper for us taxpayers to buy out the Canyon Mining Co. now instead of after an act of pollution occurs. And some things can’t be fixed for all the money in the world.

This isn’t just happening to us…