Minimal Script: Hi. I’m from [ZIP] calling to ask Senators [___] to oppose the Cassidy-Graham ACA repeal plan. Congress needs to improve the Affordable Care Act, not repeal it and leave millions of people without options. Thanks!

Twitter Warriors:  Belt on this Tweetstorm tool kit and get started. You know what to do.

For those with GOP senators: https://www.trumpcaretoolkit.org

How horrible is this bill?

It cuts money for care right off the starting line.
It reduces federal funding for expanded healthcare coverage by $26 billion immediately and by $83 billion by 2026.  After 2026, this bill ends block grant funding, meaning up to 32 million people could lose health coverage.

It bundles funds into block grants and cuts the federal money given to states. The proposal would take all of the money going out the door to help people afford and access insurance and bundle it into one “block grant” given to states. This “block grant” includes money for the Medicaid expansion and marketplace cost-sharing subsidies while also deeply cutting the total amount of money.

All it takes is one Hurricane Harvey or other natural disaster – than POOF! That State’s  money’s all gone. Too bad.

Then, it only allows the block grants to grow at 2%.
This is a far slower growth rate than medical costs grow. And to top it all off, there is virtually no accountability for how this money is spent.

Either their grasp of basic math in real-life word problems is deficient  or they are just cruel, horrible people. Pick one.

It redistributes this block grant to favor red states that did not expand access and coverage for their residents by punishing states that did.
This provision is about politics not policy. Senator Cassidy himself said: “Let a blue state do a blue thing and a red state such as mine take a different, conservative approach.”

Appalachia Residents See Doctors For Health And Dental Care At Largest Free Clinic In U.S. WISE, VA – JULY 21: People wait to enter the Remote Area Medical (RAM) mobile clinic after sleeping in their cars on July 21, 2017 in Wise, Virginia. RAM holds the three-day event annually at the Wise County Fairgrounds, one of many free weekend clinics they hold in Appalachia, providing dental, medical and vision services to thousands of uninsured and underinsured people. (Photo by John Moore/Getty Images)

We think this is actually called a “bribe” in old-person speak.

Cassidy-Graham literally takes money from states that expanded Medicaid and gives it to states that did not.
There are other factors in the Graham-Cassidy formula that  tilt the limited funds toward red states (such as distributing some of the block grant based on population density) in order to try to appease states like West Virginia whose Senators are key swing votes. Any state that was doing well with the ACA model would have to kick in a lot of money to maintain it.

California will be the biggest loser of all.  This is not an accident.

Things they hope you won’t notice…

What other interesting/horrible things does this bill do?

Is that insurance “death spiral” thing a part of this plan too?

Are you still wanting MORE information?

Let’s go deep, shall we?

First, we know that every GOP proposal so far has tried to hurt us.

Here’s a handy chart to keep track of the differences between the various GOP offerings .

If  you’ve never used the kff.org site for studying health care initiatives, now is a great time to start!

On this interactive chart, you can stack up to three health care plans side-by-side to compare and contrast.

Here’s a partial section comparing the overall approaches of ACA, Graham-Cassidy’s thing and the ACHA. 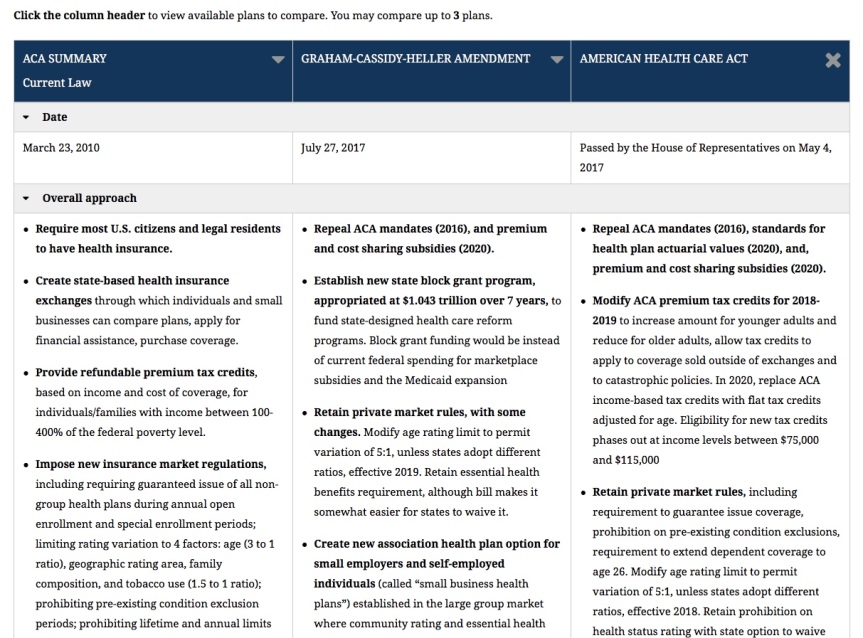 For those who like visual calendars, we’ve translated our activities and those of our compatriots into a graphic calendar…

CANCELED, but contact us to get your at-home materials! Third Thursday – pizza, camaraderie, and postcards!  Can’t make it? Help fund this event

Apr 23 – UU the Vote Letter Writing to Voters in Georgia

Apr 30 – UU the Vote Letter Writing to Voters in Georgia