We still have a long way to go…

Ann Friedman: “When it comes to electoral politics, you often need losses before you can build momentum and win. EMILY’s List president Stephanie Schriock says she advises women to run for office ‘early and often’ because they will lose their first race, and probably their second and third as well. The important thing is to keep running. And to realize that even losses lay groundwork…

“What’s heartening is that I see this long-haul attitude all around me—especially since the election. I see people showing up to immigration removal hearings, even when there’s not a big planned protest. I see people providing child care so that others can attend police-commission meetings. I see people driving women on the hours-long trip to an abortion provider. I see people offering their legal services and hosting candidate fundraisers. These things are all victories. Action over inertia is a victory.”

Real Heros of the Healthcare Wars

Hats off to ADAPT!  Their equipment isn’t the only thing made of steel. Here’s a great history of who they are and the amazing thing they did after one 4th of July weekend that changed everything, narrated by our favorite, Rachel Maddow.

Educating the cops. “Even walking across the street, anything can happen.” True, that. This is cool.

In two days, more than 50 people have been arrested during five sit-ins and protests in their senators’ Capitol Hill offices, while chanting, “Kill the bill, don’t kill me!”

Protesters Rallied! And formed a human chain! Handmaids marched. Couldn’t go anywhere in the Senate halls without bumping into protesters. Awesome. As it should be.

This is what Democracy looks like… Democratic senators have an impromptu gathering about healthcare on Capitol steps. 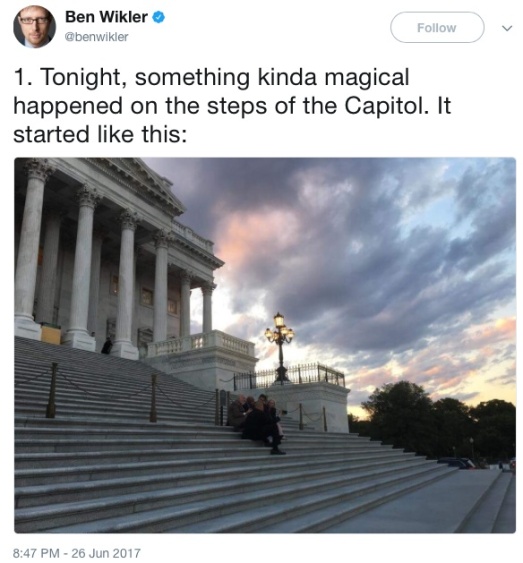 Real solutions – Talk about these in your calls to your legislators! As the Senate prepares to vote on this heinous bill, one thing is clear: a Medicare-for-All health care plan is becoming more and more popular. Elizabeth Warren endorsed single-payer for the first time, and this excellent five-point plan outlines how it would work.

Keep calling your Senators over the recess. Their offices are open. Let’s have them come back to huge tallies. Go to a protest or a town hall yourself. Here’s one in Simi on July 6th. Totally driveable from Ventura.

The House Appropriations Committee passed an amendment to repeal the 2001 Authorization for Use of Military Force. #stopthisendlesswar

The War on Voters – We’re not rolling over!

General: Listing of states’ reactions.
Our favorites:
Kentucky: “Not enough bourbon in Kentucky to make me”
Pennsylvania: “These attacks on our most important democratic institution-the right to vote- remain unproven and lack even a scintilla of support.” (2 points for using the word “scintilla”!)
New York: “New York refuses to perpetuate the myth voter fraud played a role in our election.”
California:  “The President’s appointment of Kobach–who has a long history of sponsoring discriminatory, anti-immigrant policies including voter suppression and racial profiling laws–sends a clear and ominous message. His role as vice chair is proof that the ultimate goal of the commission is to enact policies that will result in the disenfranchisement of American citizens.”
Kansas (Kobach’s own state):

Mississippi: “Go jump in the Gulf”.
Kentucky: Um, no.

We fight back – War on our Environment News!

We fight back – War on Economic Fairness!

Some states and cities’ residents are getting a pay raise this weekend.

The New York state legislature passed a bill offering tax incentives to TV shows that hire women and people of color in writer and director roles.

Mormon Church employees just got a bump to their benefit package with the addition of paid maternity and parental leave. On top of that, women can now wear pants to work.

We fight back – War on Truth!

The New York Times created a list of every lie Trump’s told since he took office in January, while Amy Siskind continues to track the ways his administration breaks with norms and upends current government processes.

BOOKMARK THIS! Clicking on each little rectangle in this chart reveals an abnormal, anti-democratic event. This visual is staggering. #wearetakingnotes

We fight back – California isn’t taking it anymore!

The state passed a bill that won’t allow the expansion of immigration detention centers and gives the state the right to oversee current facilities.

California had already barred state-sponsored travel to four states because of their discriminatory practices toward LGBTQ people, but this week they expanded the list with four new states.

The L.A. City Council will contribute $2 million to a legal fund for undocumented residents facing deportation.

We fight back – the Immigration ban!

It’s definitively not a victory that the Muslim ban has been partially reinstated, but already people are marching and lawyers are organizing. Plus, the administration reversed one of the ban’s key positions, and Hawaii filed a lawsuit against others.

Two questions about Trump and Republicans that stump progressives.
Ableist words and terms to avoid.
This week is a reminder that it’s the long game that counts

(Thanks to Jen Hoffman, Alison and Stepanie, 2 Actions a Week and the vast internet for creating this mashup of good news…)

Probably canceled due to Covid concerns. See you (hopefully) soon, but please check back for verification – Free IMMIGRATION LEGAL AID Fair – Volunteers Needed! Every last Sunday of the month we assist residents, alongside immigration lawyers, in filling out paperwork for citizenship, DACA (click here for up-to-date DACA info) and green card renewals. Can’t make it? Help fund this event