Action – Call your legislators and the House Natural Resource Committee to shut this down.

Last Thursday, we published a shout-out from Jim Hines of the Los Padres Sierra Club describing calls he’d had with Dept. of Interior (DOI) staff that the shutdown was being used to mask mining drilling activity in our national parks, with staff ordered to continue issuing permits. Well, now Trump has ordered more staff back to work on offshore oil and gas projects and he also sneak-signed an executive order to allow logging to continue and expand in our national forests during the shutdown.

Minimum script: I’m calling from [zip code] and I want Rep./Committee [___] to demand that ALL OIL AND GAS-related activities on public land, (including drilling, permit processing, inspections, public meetings and regulatory documents) and ALL TIMBER OPERATIONS on public land be halted until the shutdown is completely lifted.

.@DOIDepSec bending/breaking laws to make sure #oil industry still gets full service during #TrumpShutdown while everyone else gets the shaft:

Head of @APIenergy : "To this point, we have not seen any major effects of the shutdown on our industry."https://t.co/55opAyYBVn

Today there’s news that DOI’s Bureau of Offshore Energy Management (BOEM) is carrying out Trump’s destructive and corrupt energy dominance strategy (read this article!) by ordering more workers back to jobs related to offshore oil drilling in the Atlantic, Pacific and Arctic Oceans, as well as the Gulf of Mexico, some unpaid, some using mysterious “carry-over” funding. REPEAT: NOT ESSENTIAL SERVICES! (Guess what’s not being financed with “carry-over funds”? BOEM responsibilities like opening offsore areas for wind energy development.)

So how does our president respond? By exploiting that suffering to boost logging in public forests through a new executive order, which won't alleviate the wildfire problem.

Right before Christmas, Trump quietly issued an executive order in favor of yet another extractive industry that supported his election. The order expands timber harvest totals from OUR national forests to 4.4 billion board feet, a staggering 31% increase over 2017 levels, on the grounds that it will “curb deadly wildfires”, while ignoring the shrubs that caused much of the damage.

Just as concerning, the executive order also directs management agencies to “streamline” the National Environmental Policy Act and Endangered Species Act, allowing different public land agencies to push through timber projects without much analysis of how it might destroy the natural environment or engaging the public for input.

Despite the fact that the Forest Service is shuttered, officials there have given loggers permission to keep operating on existing sales — which was prohibited during both the 1995 and 2013 shutdowns — and are now exploring holding new auctions even if the government remains closed.

staff and cabinet members so far: 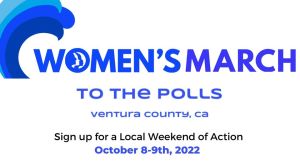 Abortion rights are on the ballot in the November 8th Election. Join Women’s March Ventura, Justice for All Ventura County, and advocates across the state of California to tell voters to Vote Yes on Proposition 1. Ballots go out to all registered California voters in a few weeks and we need your help to get the word out about Prop 1, which will protect the right to abortion and contraception in the state of California. Sign up here for textbanking, phonebanking, or Yes On Prop 1 literature drop opportunities the weekend of October 8 – 9, 2022.