Action #1 – Call your senators AND do any of these actions today.

Call your senators to support them or stand up to this nomination, then go here for the latest action list.

Action #2 – Call your senators about Kavanaugh’s plan on killing healthcare access for millions of Americans.

Judge Kavanaugh declined to answer a question from Senator Sheldon Whitehouse (D-RI) (who, BTW, rocked his opening statement), about whether he would uphold protection for those with pre-existing conditions. Based on his known record, there’s every reason to believe Judge Kavanaugh would be the deciding vote in overturning and gutting critical health care protections.

Minimal script: I’m calling from [zip code] and I want Senator [___] to protect healthcare access and vote “NO” on the the nomination of Brett Kavanaugh to the Supreme Court.

Background
He has already written extreme legal theories to overturn longstanding precedent to diminish the power of federal agencies to help people. As a D.C. Circuit judge, he has written dissenting opinions in three cases that could have undermined the Affordable Care Act (“ACA”) and jeopardized access to health care.

Seven-Sky (2012): This upheld the ACA’s requirement that individuals purchase health insurance as within Congress’s authority under the Commerce Clause. Kavanaugh claimed that the individual mandate was “unprecedented” as well as “jarring” and praised a judicial decision that would limit Congress’ ability to regulate commercial activity such as health care. His opinion was well-outside the legal mainstream at the time but echoed the beliefs of partisan political organizations working to undermine the ACA.

Priests for Life v. US Dept. of Health and Human Services: The D.C. Circuit court rejected a challenge to the ACA’s accommodation to the birth control benefit, which allowed certain religiously-affiliated non-profit employers to opt out of providing birth control coverage directly to their workers by submitting a one-page form notifying their insurer or the federal government of their objections. Guess who Kavanaugh sided with.

Sissel v. U.S. Department of Health and Human Services – Sissel v. HHS, 2015 rejected the claim that the ACA was unconstitutional because it was a revenue-raising bill, but failed to originate in the House of Representatives as required under the Origination Clause.  Judge Kavanaugh argued that the D.C. Circuit Court should consider a claim that the ACA was unconstitutional. His fellow judges described it as a ‘flawed’ ‘misread’ of SCOTUS precedent.”

Action #3 – “NO” on S. 3388, a piece of nonsense to protect the GOP from being ridden out of town on the rail of pre-existing conditions

The GOP knows that if Kavanaugh gets a SCOTUS seat, he will vote to kill the ACA, especially the protections for pre-existing conditions, which is currently supported by 93% of Americans. Therefore, GOP senators have introduced the deceptively-titled Ensuring Coverage for Patients with Pre-Existing Conditions Act. Although it sounds like it would prohibit insurance companies from denying coverage or charging more for it based on someone’s health status, the bill includes substantial loopholes in the industry’s favor:

These loopholes make this law essentially useless, other than to protect GOP seats until the public understands what actually happened.

Minimal script: I’m calling from [zip code] and I want Senator [___] to vote “NO” on the GOP sham bill S.3388 – “Ensuring Coverage for Patients with Pre-Existing Conditions Act”.

Minimal script for GOP senators: I’m calling from [zip code] and I want Senator [___] to vote “NO”on the GOP sham bill S.3388 – “Ensuring Coverage for Patients with Pre-Existing Conditions Act”. If they truly wanted to protect their constituents, tell [him/her] to stop attacking the ACA.

There is widespread bipartisan support for the ACA’s protections for people with pre-existing conditions, probably because it affects at least 130 million Americans. 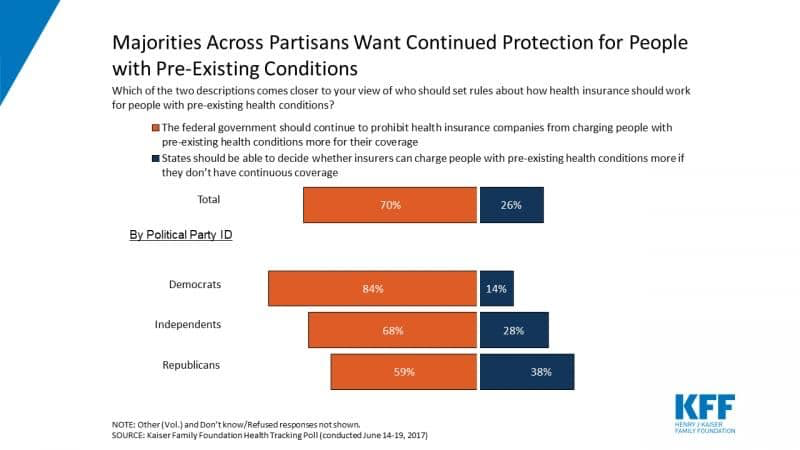 In 2012, the Supreme Court, in a 5-4 victory for the ACA, upheld the individual mandate as an exercise of the government’s power to tax, adding that the individual mandate was “closely intertwined” with the requirement for insurers to offer coverage to all consumers at the same basic prices, regardless of their health status.

However, the Congress repealed the individual mandate in its tax scam legislation last year, and the Justice Department has explicitly stated that the law’s consumer protections can no longer be justified. In a legal filing in June, the department supported the argument of Texas and 19 other Republican-controlled states that the law’s protections for people with pre-existing medical conditions are not constitutional. This argument, if adopted by U.S. District Judge Reed O’Connor, “would be breathtaking in its effect,’ said Timothy Jost, a retired Washington and Lee law professor who follows such litigation closely. Workers “could face the prospect of insurance that doesn’t cover their pre-existing conditions when they enroll in a plan with a new employer,” said Larry Levitt of the nonpartisan Kaiser Family Foundation.

“Of all of the actions the Trump administration has taken to undermine individual insurance markets, this may be the most destabilizing. . . . [If] I’m an insurer, I don’t know what I am supposed to do or not.”

Surely, Mr. Jost speaks in jest.  These corporations know exactly what they will do. The lawsuit will likely result in “… a return to what the individual market looked like before the ACA, where insurers would require applicants to fill out long questionnaires about their medical histories, and make decisions based on people’s health and how much to charge.” According to a 2016 analysis by the Kaiser Family Foundation, approximately 52 million Americans under the age of 65 could find their access to health insurance at risk because of a wide range of preexisting conditions, from diabetes to cancer to pregnancy. A 2017 Center for American Prograss (CAP) study found that if the ACA is removed, premiums for selected health conditions would skyrocket, not even accounting cost increases for previous health issues a patient might have suffered. 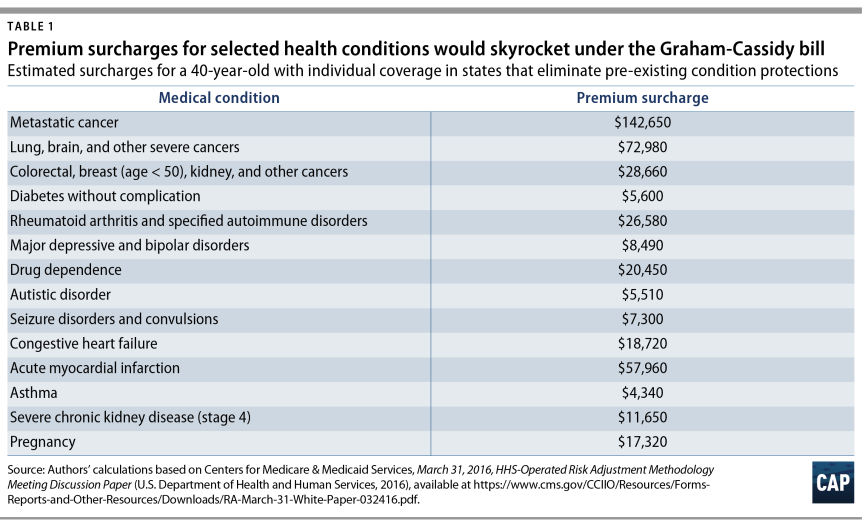 Republican congresspeople knows that administration’s refusal to defend pre-existing guarantees will be election-killers for their candidates. Therefore, the GOP came up S.3388 – “Ensuring Coverage for Patients with Pre-Existing Conditions Act”, which, on the surface, pretends to continue the popular exemption, but really gives the insurance industry back its huge latitude to discriminate on rates.

Note the some of the 10 original sponsors are playing a critical role in the judicial confirmation fight, including several members of the Senate Committee on the Judiciary Committee, who are reviewing the documents of Kavanaugh’s record that are being withheld from the public.