Continue calling on the #TrumpTaxScam! It matters!

Yes, it matters. Even if you have a Democrat for a Representative and/or Senator, it matters. If calling seems to take too much time, try these tips to make calling faster. If calling makes you nervous, read here about how to make it easier.

The GOP’s rush for a final Trump Tax Scam vote is truly a last ditch effort.
Doug Jones’ victory in Alabama — powered by a fired up electorate of progressives who are getting out there and working hard — is a sure sign that Americans are ready to reject Republicans’ vision for the country. That is why they’re in a hurry. Plus Trump wants a BIG Christmas gift. From us.

Minimal Script for senators only: I’m calling to from [zip code]  to ask that Sen. [___] to refuse to take a final vote on the tax scam until the new duly-elected Senator from Alabama is seated.

Minimal Script for both senators and representative: I’m calling to from [zip code]  to ask that Rep./Sen. [___] to vote against the disastrous Republican tax bill and to return to regular order for these incredibly important issues.

Join with your local resistance groups outside your nearest GOP office on Monday or Tuesday. Or join us in one of the following locations: 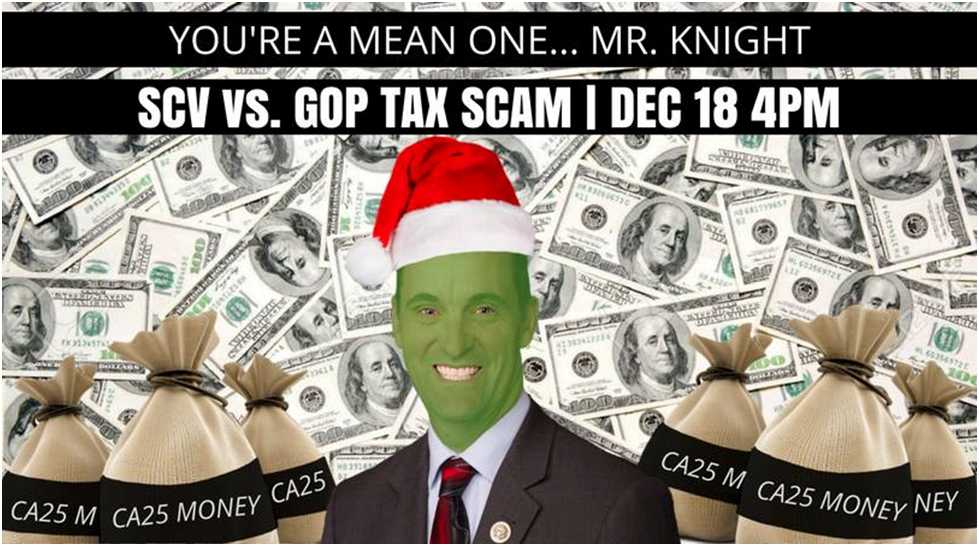 Early this year hundreds of people showed up for the #Knight Out event, a simultaneous protest at Knight’s three district offices. On Monday,
12/18 at 4 pm we’ll do it again!
Groups from in and out of the district will be protesting the GOP Tax Scam at Knight’s Palmdale, Santa Clarita and Simi Valley offices.
We’ll show Knight the “Flip the 25th” movement has grown larger and stronger over the year and we’ve only just begun.
On board so far: ACLU Antelope Valley,  Burbank Democratic Club,  CA25 United for Progress, CADEM,  Civic Sundays, Democratic Alliance for Action, Democratic Club of the High Desert, Indivisible AV, Conejo, Northridge, SFV and Ventura, L.A. Federation of Labor, Planned Parenthood, SCV Young Dems, Simi Valley Democratic Club and WIN.
Knight needs to know he must vote NO on the #GOPTaxScam or, like The Grinch, he will be held accountable.
Bring signs. Costumed characters, “ugly” Christmas sweaters and holiday attire suggested.
Santa Clarita Facebook Event Link
Simi Facebook Event Link
AV Facebook Event Link

We need singers! And videos of this!

“House phones ring
Are you listening
Folks are mad
But Ryan’s insisting
Another tax fight!
No funding bill in sight
Walking in a winter blunderland

“In the darkness they can pass a tax plan
And pretend that workers will be fine
We say work together, they say no man!
We don’t need your vote while we’re in town

“Later on, they’ll conspire
To cut programs we require
Who needs Medicaid
When donors get paid
Walking in a winter blunderland

“Trump’s first year, it’s been chilling
The New Year’s near, ain’t it thrilling
It’ll be a new day, 2018’s not far away
Walking in a winter blunderland

Come watch history be made at City Hall in Ventura at 6 pm tonight!

Help decide how Ventura will be divided into voting districts!

The below maps have been processed by the demographer. These maps originated either as submittals by residents or the demographer after hearing public testimony.  The Maps were numbered as received.

Use this link to view all Maps on the online interactive viewer.  Each Map (1-33) may be selected in the layers box to display each map for viewing.

Here are quick links to the 4 maps that were chosen for the final cut:

(From CAUSE) Our map made it into the top 4. Tomorrow night, the council will be choosing from maps 11, 16, 22, 23. Here’s our letter to the City Council to explain why we hope they will choose map #22. Come join in and help us achieve this important goal.

CAUSE Letter on Final Ventura Districts

Ongoing – Join our postcard campaigns! We’re always working on something, whether it’s a campaign to remind people to vote, to get registered, or weigh in on a certain issue.

June 12 – STEVENSON RANCH – Literature Drops in CA-25. We can flip this seat!

June 12 – OXNARD: Oxnard Pride Outdoor Movie Screening: Trade: Be Yourself. Everyone Else is Taken

June 23 – Online: Beyond Protection: The Future of Dreamers in the U.S. with Professor Armando Vasquez-Ramos

June 24, 4:30-6pm – SIMI VALLEY: Peaceful Protest at Reagan Presidential Library, prior to Mike Pence’s speech. Corner of Madera and Presidential Dr. Bring your clever signs, wear a face mask and let’s show the world we do not approve of Pence and Trump’s continued threats to our Democracy.

July 8- Online: CAUSE Summer of Change Series: Investing in Youth of Color

July 22- Online: CAUSE Summer of Change Series: Protecting Tenants Beyond the Pandemic

July 25 – (we’re back!) – Free IMMIGRATION LEGAL AID Fair – Volunteers Needed!  Every last Sunday of the month we assist residents, alongside immigration lawyers, in filling out paperwork for citizenship, DACA, and green card renewals. Can’t make it? Help fund this event