Despite having never having watched Mr. Rogers as a child, a video of him speaking about how his mother taught him to deal with bad things has stuck with me.

And now, I too, look for the helpers when something terrible happens. And there they are. In Charlottesville. The heroes who jumped in to help in the face of imminent danger, the police who came from far away to keep people safe, including the state troopers who died, and the people who work, tirelessly, year-round, to make Virginia an good and more equitable place to live. And the brave resisters, of all types, who stood up for our morals and our values…

…from the woman who died…

…to the governor whose message was absolutely clear…

…to companies who did the right thing. Airbnb refused to provide housing to participants of the white supremacy rally.

… to churches who re-dedicated themselves to a message of love. Episcopal clergy met in Charlottesville to affirm that all races are equal.

…to women in pink helmets who literally stood indivisible… 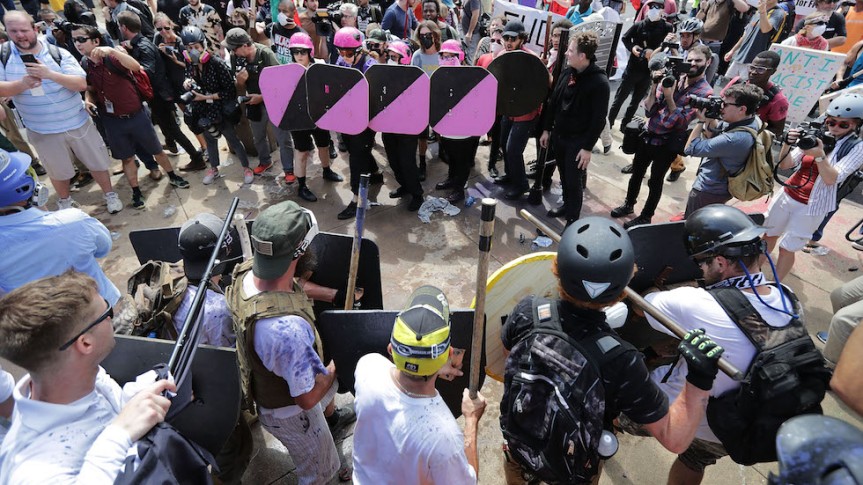 I feel overwhelming gratitude to all of these people on the front lines who were helping to  remind Americans, in the midst of ferocious verbal and physical violence, of our better selves.

But the resistance didn’t stop at the border of Charlottesville. By today, Sunday, at least 682 separate “Solidarity with Charlottesville” events will have been held in protest of this horrendous alt-right rally.

“These events were put together by more than 60 different progressive organizations in the last 24 hours, according to Sarah Dohl of Indivisible.” 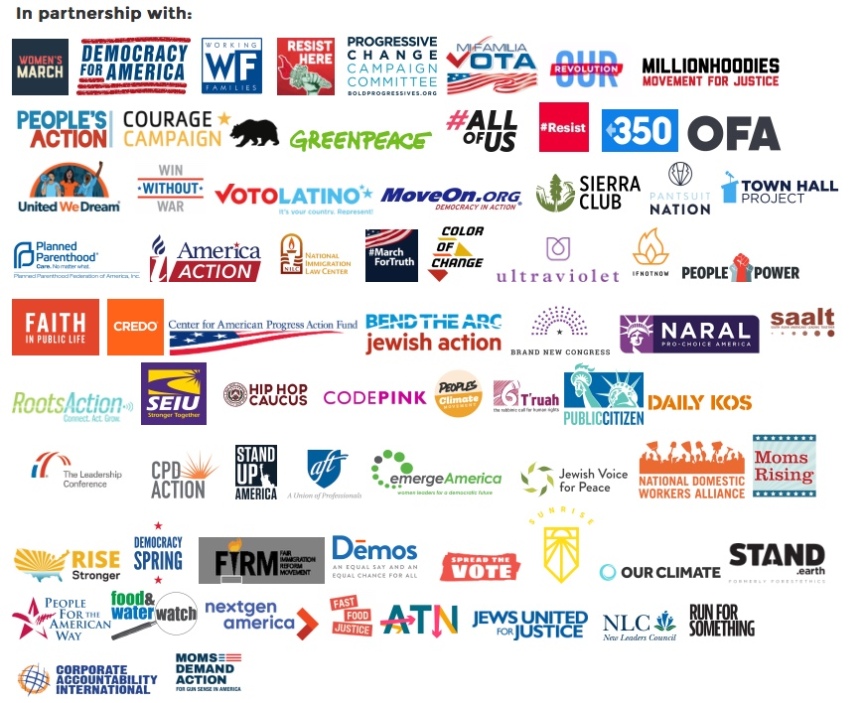 2,608 miles away, Venturans and neighbors from various parts of  Ventura Country stood up together for Charlottesville and to honor the lives lost there in this protest organized by MoveOn… 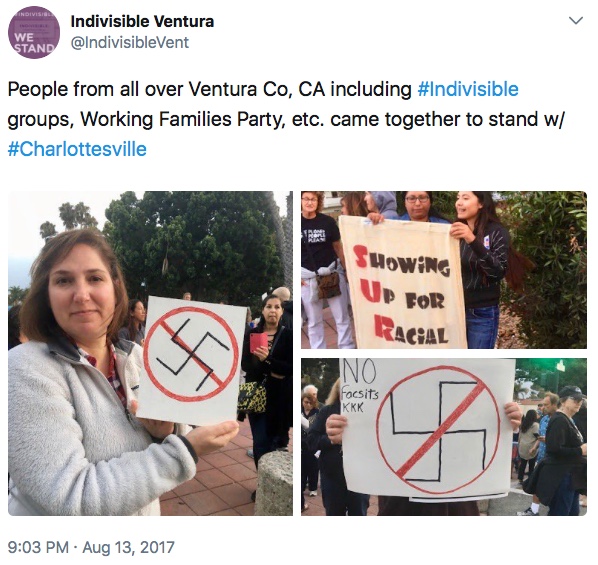 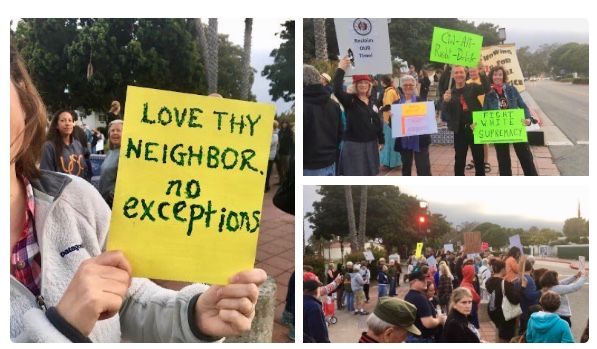 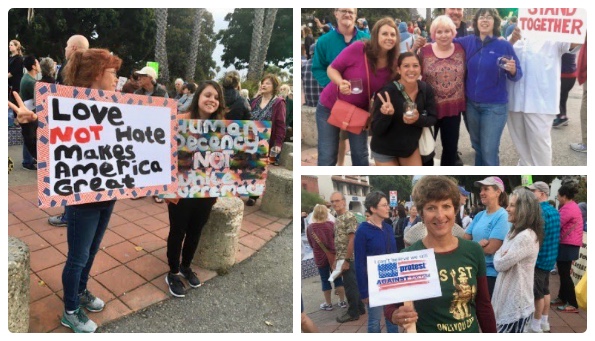 America’s heart is still beating as strong as ever. If you haven’t already, join one of the groups listed above. Then stand indivisible with your neighbors against those who embrace racism, xenophobia and anti-semitism. There are more of us than there are of them. We will win this battle if we show up to the field.

Other Good News in Civil Rights

The trouble in Charlottesville is inspiring other places to get rid of their confederate statuary more quickly.

Hundreds of people gather in support of Muslim people in the wake of bombing.

Good News for the Environment!

Cyclists in Beijing may soon double as mobile air filters. Holland’s Studio Roosegaarde has developed anti-smog bicycles and the first prototype is expected to hit the Asian city’s congested streets as soon as the end of this year

California is experimenting with a new way to cool down city heat islands.

The US Court of Appeals ruled against the Interior Department’s decision to remove gray wolves from the endangered species list. This is a small victory, and more battles loom, but let’s thank Ralph Henry, the Humane Society’s director of litigation, who argued the case and won this round. Read more here.

A court ruled that even a billionaire cannot prevent people from accessing their beach.

With pressure from Earthjustice, and a coalition of environmentalists, labor unions, and jobs advocates, the LA County Metropolitan Transportation Agency has purchased 95 electric buses as part of a newly passed policy to reduce tailpipe emissions to zero by 2030.

A non-venomous snake who specializes in eating venomous snakes is re-introduced to Florida after becoming locally extinct.

Thanks to habitat restoration efforts at the Great Lakes, Piping Plovers have returned to Pennsylvania.

Lampreys are making a comeback. No, really. This is a good thing.

Action Project: You can help scientists learn more about how plastic gets into our waterways by teaching a computer program how to identify plastic among other detritus.

Action Project: Monarch butterfly migration is almost here!  Consider making the area around your home or office a Monarch Waystation.

There were two wins in WA and AK for women’s access to legal abortion.

Samantha Bee reminds us how powerful women are.

EMILY’s List is expanding after receiving 16,000 requests from women interested in running for office over the last 9 months. BTW, between 2015 and 2016 they had 920 inquiries total. #lookoutboys

More news comes out to remind us how valuable our immigrants are.

Mayor Toni Harp affirmed that New Haven respects people no matter where they come from — and for offering sanctuary to asylum seekers like Marco Reyes Alvarez.

California’s Labor Commissioner is putting a stop to visits from ICE agents who don’t have a search warrant signed by a judge.

New Mexico’s Bernalillo County voted to uphold its policy as an immigrant-friendly community.

#TakenoteChicago—yes, the city recently took action against the DOJ, but there is still more to be done to protect our immigrant community.

Good News for and from young people!

Teen activists from one of Boston’s poorest neighborhoods estimated that TD Garden, Boston’s giant sports and entertainment arena, owed $13.8 million for the benefit of the city’s public recreation centers. The teens want the money to help pay for a $30 million construction project that will bring a new rec center/ice skating rink to a neighborhood of about 26,000 black and Latino youth. The neighborhood has been without such a facility for decades. Under a 1993 state law, TD Garden is obligated to hold three fundraisers a year to benefit the city’s public recreation centers. No such fundraisers have ever been held. Since the issue has come to light, TD Garden has agreed to pay $1.65 million for the rec center/skating rink. The teens say that’s not enough.
Action: Let’s support their efforts. Let’s tell the following that we expect TD Garden to comply with the law going forward, and to do more to help fund the construction of the Jackson Square recreation center: A) Jeremy M. Jacobs, Chair, Delaware North (corporate owner of TD Garden), ; B) Governor Charlie Baker: ; C) Attorney General Maura Healey:  and D) Our state reps: . Let’s also thank the teens and their mentors for their pursuit of justice for their community: Hyde Square Task Force, P.O. Box 301871, Jamaica Plain, MA 02130.

Good News for people who could surely use some!

An app is in the works that will allow users to convert their daily change into bail money for those that cannot afford it—and the developers are looking for volunteers to help build it.

After nearly eight years of protesting by community members, a much needed adult trauma center is finally set to open in Chicago’s south side in early 2018. When the announcement was first made back in 2015, Veronica Morris-Moore, co-founder of Fearless Leading by the Youth, said: “We’ve been relentless. It’s not that all of a sudden people decided to listen to activists…People didn’t think young black people could come together and wage a national movement. We built power and … political officials have started to see we can’t keep ignoring people.”

52% of Republicans think Congress should try to make ACA work. Dems at 95%.

Your presence at August recess town halls is getting the healthcare message across.

A Democrat wins special election in an Iowa district previously supporting the president.

Action: Emily’s List has put together a list of great women candidates. Learn about the candidates they’ve endorsed, and donate to them specifically.

Action: Attend a training: Even if you’re only curious about what running for office looks like, you’re still welcome at one of their trainings. They’re doing them in 20 cities so far this fall.

A woman must often be asked 7 TIMES before she decides to run for office, whereas a man doesn’t need to be asked at all. Read this breakdown of why more women don’t run for office and how to encourage young girls to consider public service.

Action: Twenty-one million Americans cannot vote because they lack a government-issued ID, according to the organization Spread the Vote. Spread the Vote is working to get every citizen the ID they need to vote. Let’s help this important cause!
(1) “like” their Facebook page
(2) volunteer (https://www.spreadthevote.org/volunteer),
(3) donate.
(4) If we live in Virginia or Georgia, let’s see how we can help the special campaigns going on in those states

Being Generous Really Does Make You Happier (time)

(Thanks to Alison and Stepanie, Rogan’s List, Jen Hofmann, Calvin’s List, my friends from Indivisible groups with incredible sources, and the flood of information from the never-resting internet.)

One thought on “Your Weekly Dose of Sanity-Saving Good News! – “Look for the Helpers” Edition”