Action #1 – Trump wants more corporate welfare while children go hungry. Call your legislators and give them some conditions.

Trump has finally figured out that it’s time to pivot to “chicken-in-every-pot” politics if he wants to be re-elected. But a $1000 check is couch-cushion change compared to what he’ll hand to a rapidly growing list of companies, such as airlines, hotels, and cruise lines, casinos, retailers and more. He himself might even profit from a bailout.

On Tuesday, Sen. Elizabeth Warren (D-MA), after reviewing the implementation of the 2008 bailout for banks and automakers (that was the one where banks and financial institutions paid their executives $32.6 billion in bonuses), released proposed conditions for any new industry bailouts—including guaranteeing workers a $15 minimum wage, banning corporate stock buybacks, and prohibiting federal funds from going to executive bonuses.

Minimal script: I’m calling from [zip code] and I want Rep./Sen. [___] to apply all eight of Sen. Elizabeth Warren’s conditions to any corporate bailout:

Action #2 – If you haven’t made these calls yet, do them now.

The Great American Tax Scam of 2017: Trump promised that the biggest winners in his GOP tax “reform” plan would be low-income and middle-income taxpayers. It was all a lie. There were no guarantees of wage minimums in the plan. Corporations refused to sign union pledges for wages hikes. (Great in-depth post mortem report of the tax scam here.)

Here’s the math for rich people: The bulk of the $150 billion tax cut to corporations in 2018, (tax rate down from 35% to 21%), went into shareholder dividends and stock buy-backs to line the pockets of the 10% of Americans who own 84% of the stocks. By December 2018, stock buybacks hits a record $1.1 trillion dollars. Note: buybacks were illegal until the Reagan administration. “The surge in corporate buybacks is driving wealth inequality and wage stagnation in our country by hurting long-term economic growth and shared prosperity for workers,” Senator Baldwin (D-WI) said in a release. “We need to rewrite the rules of our economy so it works better for workers and not just those at the top.” Perversely, buybacks can happen simultaneously with layouts of employees. In 2018, Caterpillar revealed plans to buy back $11 billion worth of shares while laying off hundreds of workers.

The new tax treatment for “pass-through” entities — companies organized as sole proprietorships, partnerships, LLCs, or S corporations (Trump has these as well) — meant an estimated $17 billion in tax savings for millionaires in 2018. The new tax law also created loopholes allowing our largest corporations to pay no taxes.

Here’s more math for the rest of us:  Only 6% of the tax scam went to workers, sometimes as part of one-time bonuses. The nonprofit research group Just Capital, which is tracking 1,000 large public companies’ reports of how they are spending their tax cuts, calculates that the typical worker at one of those large companies has received about $225 this year in increased salary, a one-time bonus, or both, attributable to the new law. 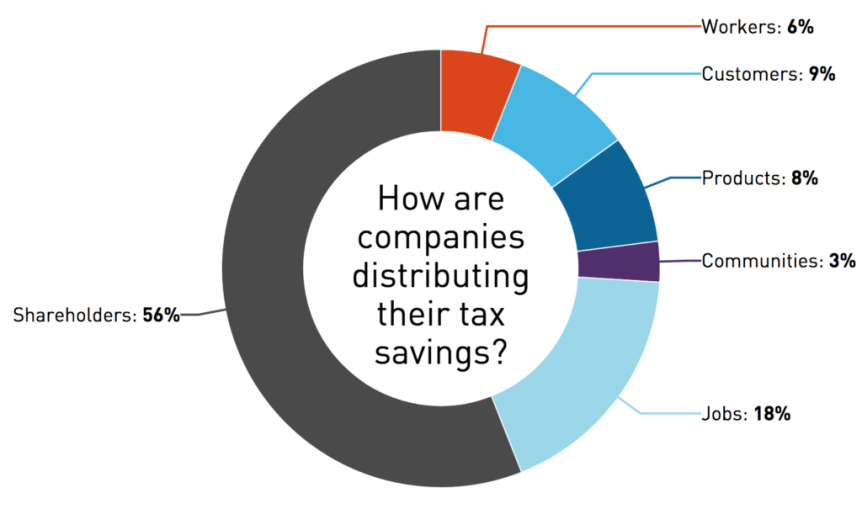 This does little to shift the reality that employee wages have stagnated  or have even fallen. Economists call current  wage growth “disappointing.”

Wages were supposed to rise after Trump's tax cuts. Instead, they’ve fallen https://t.co/LactYzTE7a via @bopinion pic.twitter.com/qUdfYQK1En

Just Capital’s report goes on to state that the actual distribution of the tax scam was “in direct opposition to what the American public told us when we asked them how they thought companies should allocate their tax windfall – with respondents agreeing that 24% of savings should go toward workers and just 10% toward shareholders.”

Why is this so critical now?: After decades of wage stagnation, we now have a large population with so little financial resilience that they can’t afford an unexpected $400 expense, much less a 3-month enforced coronavirus-vacation from wages, a administration intent on shredding our safety nets and worker protections and possibly 30 MILLION children who are at risk of hunger during mandatory school closures.

Let’s just focus on one industry of the rapidly growing line -Why do the airlines need a bailout?:  First, remember that we already gave the airlines a $15 billion bailout in 2001. “The bailout program may actually have made matters worse, some experts say, by forestalling a badly needed shakeout in the industry, keeping the weakest carriers alive at the expense of the others and perpetuating a glut of flights and seats,” the Times wrote. CBS News later reported that some of the bailout money went to already bankrupt companies, package delivery fleets and Grand Canyon tour helicopters.” Now, in 2020, airline corporations, as have others, have deliberately left little in their company bank accounts for emergencies. In Dec. 2019, U.S. airlines celebrated their 10th consecutive year of profitability. Delta’s profits for each of the past five years, back from 2019 to 2015, were $4.8 billion, $3.9 billion, $3.2 billion, $4.2 billion, and $4.5 billion. Mergers have given the big four (Delta, United, American, and Southwest) about 80 percent of the U.S. market.

Where did all that money go? Over the past decade, according to Bloomberg, U.S. airlines spent 96% of their tax scam loot and cash profits on stock buybacks to enrich investors and their own executives, whose positions often come with stock holdings. American Airlines alone repurchased more than $12.5 billion of its shares over the last ten years. Keeping money on hand for emergencies apparently causes CEOs problems, as activist investors see cash as “unproductive capital,” and workers, from pilots to catering workers, start demanding what they deserve –  higher wages and better benefits.

Now, airlines expect taxpayers to bail them out to the tune of $54 billion. The airline industry, along with all travel industry CEOs lining up with their hands out,  should not see one taxpayer dime unless the bailout comes with significant strings attached. Two of the biggest unions representing airline and aviation workers, as well as some Democratic lawmakers, are demanding limits to stock buybacks, dividends, and executive bonuses, as well as guaranteed long-term protections for workers and consumers. Sara Nelson, the president of the flight attendants’ union, said on Twitter. “The airline industry didn’t cause the pandemic and money should come with significant conditions to help workers and keep planes flying, not enrich shareholders or pad executive bonuses. Airlines must commit to maintaining payroll. It means no bonuses, no buybacks, & no breaking union contracts in bankruptcy. Companies should commit to pay a min $15 wage and board seats for workers.”

The airline industry is in crisis. A lot of people are asking what to do. We have a plan that starts with workers. A thread: 1/11

This is just the start: Many of the industries affected by closure include friends, donors and associates of our morally-flexible president. The hotel industry, which did a lot of buybacks of their own stock, wants $250 billion. The Norwegian Cruise Line made a $100,000 donation to Trump’s foundation in 2005 after Melania Trump christened one of its ships. (yes – that foundation – the one that was shut down by the courts for misuse of funds)  Carnival Corp. Chairman Micky Arison is one of Trump’s friends. The casino industry wants money too and billionaire casino megaowner Sheldon Adelson is one of Trump’s largest donors. Maybe the billionaires and millionaires who own professional sports teams will come, hat in hand, for more taxpayer money beyond that which built their stadiums. Trump wants to give money to the oil industry as well, despite signs that they themselves realize how corrupt that looks.

What would an capitalist say?: One option is to let these greedy companies go bankrupt…listen to Scott Minerd of Guggenheim Global discuss how giving a $50 billion bailout to an industry who awarded itself with $45 billion dollars of buybacks over the last ten years is a “political nightmare.”