The deadline is updated to 12/11 due to a technical issues with a government regulation website yesterday.

Servers already have enough to deal with…

Now the Trump administration has put out a new proposal that allows restaurant owners to pocket more of their workers’ tips indirectly. Our administration has squarely landed on the side of the National Restaurant Association (the “other NRA”) against tipped workers and has neglected their duty to enumerate the economic damage caused by this proposed change.

First- good news: The new rule does prevent employers, managers, and supervisors from directly taking tips received by employees. But that’s kind of the bare minimum.

The bad news: The proposed rule eliminates the “80/20 rule”, replacing a 20% limit on servers doing non-tipped “side work” with slippery wording like “reasonable” amount of time. (See definition of “80/20 rule” under “Deeper Dive” below)

More bad news: The proposed rule allows employers who pay the full minimum wage and don’t take “tip credit” to implement a mandatory “nontraditional” tip pool to include employees who do not customarily and regularly receive tips, such as cooks and dishwashers. “Wait! This seems like a good idea”…keep reading. (See definition of “tip credit“ under “Deeper Dive” below)

Why are these changes bad for servers?: The Department of Labor claims that they can’t figure out how their new regulation would affect the income of servers (see page 53972 of the proposed rule), which is an abrogation of their responsibility and they need to be called out on it in the public comments. Luckily, the Economic Policy Institute could figure out the harm involved and has published estimates that tipped workers will lose more than $700 million dollars in tips each year if this proposal goes into effect, transferring that wealth back to their employers.

Why are these changes bad for back-of-house (BOH) staff?: Letting BOH guys get in on tipping seems like a fair thing to do. However, according to EPI.org, “…as employers ask tipped workers to do more nontipped work as a result of this rule, employment in nontipped food service occupations will decline by 5.3% and employment in tipped occupations will increase by 12.2%, resulting in 243,000 jobs shifting from being nontipped to being tipped. Given that back-of-the-house, nontipped jobs in restaurants are more likely to be held by people of color while tipped occupations are more likely to be held by white workers, this could reduce job opportunities for people of color.”

The owners win again! :The Labor Department estimates that this kind of tip pool could result in the transfer of as much of $213.4 million a year in tips from wait staff to kitchen workers, though the department says the actual transfer would likely be about half that much. Critics say that amounts to an indirect transfer of money from tipped workers to business owners, who can then use less of their own money to compensate kitchen workers.

What’s a better solution to all of this for workers and our economy?: This whole issue of underpaid “side work” could be put to rest if the federal government simply phased out the sub-minimum wage. The Democratic-controlled House passed a bill (H.R.582 – Raise the Wage Act) in July to phase out the inhumane sub-minimum wage as part of a broader increase in the minimum wage, but the measure has stalled in the Senate, another one of 400 bills stalled by Senator Mitch McConnell.

What is a “Subminimum Wage”:

What is the “Tip Credit”:

In simple terms, it means that the tip you leave a server is not just a reward for good service. The restaurant owner can use it to substitute for part of that server’s basic minimum wage salary.

The first graph is an example which demonstrate what happens when subminimum wages combines with the “Tip Credit” benefit for restaurant owners. The second graph shows would happen if this repressive system were removed.

(from EPI.org) The “80/20 rule” currently requires employers to pay tipped employees the minimum wage, versus the sub-minimum wage, when the employee spends more than 20% of their time performing non-tipped duties. Examples of related non-tipped duties include “cleaning and setting tables, toasting bread, making coffee, and occasionally washing dishes or glasses.” The proposed rule changes the 20% limit to any “reasonable” amount of time that an employee in a tipped occupation performs non-tipped duties “contemporaneously” with his or her tipped  duties.  Amazingly vague and open to abuse of workers. EPI provided an example to prove that the more nontipped work that is done by tipped workers earning the subminimum wage, the more employers benefit.

The first graph below is the current state of affairs. The second graph shows what could happen when unscrupulous owners and managers decide to save money, and it would be completely legal under this new proposal. 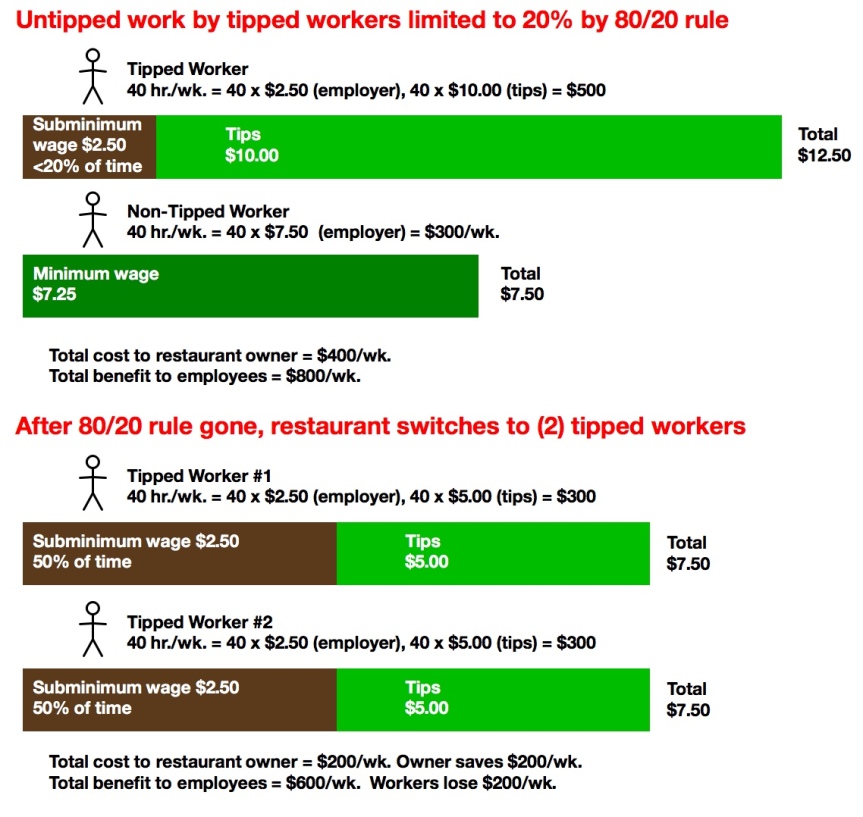 The protection provided by the 80/20 rule is critical for tipped workers. It prevents employers from forcing servers to spend hours washing dishes at the end of the night, or prepping ingredients for hours before the restaurant opens. Occasionally, a server might play the role of the host, seating guests when a line has formed, or filling salt and pepper shakers when dining service has ended—but such activities cannot take up more than 20 % of their time without employers paying them the full minimum wage, regardless of tips.

The proposal’s “reasonable time immediately before or after performing the tipped duties” becomes something that’s defined by an employer. It’s a pandora’s chest of abuse of already low-paid workers. EPI.org provides examples:

How does “tip credit” track with poverty? (from accounting-degree.org)

Check out this Department of Labor chart to see your state’s tipping requirements.

As of last night, there are 17 pages (25 comments per page) filled with this form letter from various restaurant owners to praise the proposed regulation. (We’ve copied it here.)

“I am writing to you on behalf of my restaurant to express general support for the proposed rule issued by the Wage and Hour Division (WHD). By clarifying the rules that apply to tipped employees, the proposal will make it easier for businesses to know how to pay their people. (Yes, less).The proposal will also lessen the paperwork obligations associated with tipped employees and reduce opportunistic and frivolous litigation.

The proposed changes to the dual jobs regulation expressly rejecting any cap on the amount of time a tipped employee can spend on tasks that do not directly generate tips restores the law to what Congress intended in the first place: allowing employers to take a tip credit with respect to employees engaged in a tipped occupation. I support those changes. (Yes, we get to pay them less)

In addition, I support the proposed changes regarding tip pooling, as they closely track the new statutory language. I would, however, suggest that WHD clarify what is already implicit in the statute and the proposed regulations: that the limitations on tip pooling apply only in instances where a tip pool involves at least one tipped employee. There may be circumstances where non-tipped employees, including supervisors or managers, may themselves receive tips directly from customers, or may even have tip pools just among the non-tipped employees. The regulations should make clear that the law does not prohibit supervisors or managers from pooling or retaining tips in those circumstances, where no tipped employee shares tips with a supervisor or manager.” (Yes, we, the people with power, want tips too.)

Don’t let this selfish money-grab be the last word on the salaries of some of the hardest working people on earth. Take 10 minutes and write a comment. If you’ve ever worked as a server, don’t forget to include that.