(Steven Singer, a veteran National Board-certified teacher, author of Gadfly on the Wall blog, Quotes on image above from Mashable)

The Trump Administration would like you to agree that it’s a great idea to shave $90 million dollars off the federal budget by taking free lunches away from a half a million “food insecure” kids. They don’t care that one in six children live with hunger in America today, and how hunger makes it harder for kids to learn and makes them sicker, both as kids and as adults. Adequate nutrition is so tied to kids’ academic success, studies have shown that end-of-grade reading and math tests vary depending on how much time has elapsed since the family’s SNAP (food stamps) benefit arrived, with scores peaking between two and three weeks after benefits were received. And now the GOP wants to take that support away. For $90 million dollars. How much is $90 million dollars anyway? Is it enough to risk the futures of a half million kids?

1 in 6 children in the United States lives with hunger. That’s 11 million kids!

(No Kid Hungry) The federal poverty level is the minimum amount of money the government has decided that a family needs each year to afford the necessities of life: food, clothing, shelter and transportation. In 2018, the federal poverty level was set at $25,750 for a family of four. Almost 12% of Americans, approximately 40 million people,  live below this line. However, families making twice that much are still considered low-income by most experts, and many struggle to make ends meet. Those 11 million kids live in what are called “food  insecure” homes, which means that children may get smaller portions than what they need to be healthy, or their parents can’t access to nutritious food. (Find what percentage of kids are “food insecure” in your state (orange box). The average in 17.9%. CA has 20.7%. Arkansas is at 25%.)

When we last talked to the Administration…: In July, the USDA asked for public comment on a proposal to restrict the number of families eligible for food stamps (SNAP) to only those with gross incomes of 130% of the federal poverty level (FPL) (about $33,000 for a family of four) or less. They want to stop states with higher costs of living, like CA & WA, from enrolling families with higher incomes if their child care, housing and other eligible expenses bring their income down to about $25,000 or less. This humane practice of extending “categorical eligibility” has been in effect for over 20 years to deal with the realistic costs of living in different areas. Three million people, including the elderly and children, would lose access to food assistance, “saving” us $2.5 billion a year, if “categorical eligibility” is rescinded.

This is the sequel: The public comment issue that ends TODAY pertains specifically to “the potential impacts on participants in the National School Lunch Program and School Breakfast Program.“ or, in real-speak, kicking kids off free school lunch programs to save the $90 million, if one doesn’t count state and school administrative costs, which they haven’t bothered to estimate in their proposal. Under the Trump-plan, families who would no longer qualify for food stamps under the new rule will also lose their automatic eligibility for free school meals and would have to submit a separate form to their kid’s schools. This will affect about 982,000 children. 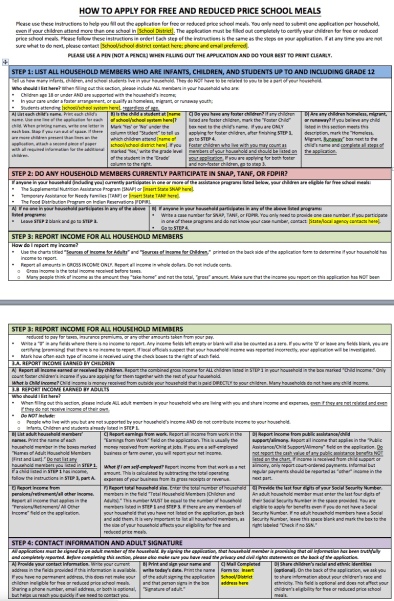 Unfunded labor, panic & confusion: Schools would need to review and approve the flood of new application forms parents must fill out. “Just getting families to apply for the meals is going to be a challenge,” said Diane Pratt-Heavner, spokeswoman for the School Nutrition Association, which represents about 58,000 school cafeteria workers and nutrition managers at school districts across the country. She said families often don’t know they must  apply for free and reduced-price lunches. Others don’t realize they have to reapply annually. Still others won’t apply at all because they’re working two jobs, or they forget, or they’re immigrants who are wary of applying for benefits, she said.

“The concern is that there will be kids lost in this transition,” Pratt-Heavner said.” Michael Rosenberger, head of food and nutrition at the Dallas Independent School District in Texas said that if schools or districts must go back to making families fill out applications, parents will be burdened and the district will incur “significantly higher overhead expenses.”

Are we at the “stealing coins from under our cushions” stage yet? This would also force our schools to become debt-collectors for families who won’t be able to afford full or reduced price lunches, but don’t comply with the new income guidelines. Even now, The Washington Post reported that K-12 students in the D.C. area owe a collective $500,000 in unpaid lunch debt for the first semester of the current academic year alone. Median lunch debts have risen to $2,500 per school and schools have resorted to hiring debt collectors, various forms of lunch shaming and preventing kids from participating in activities and graduations ceremonies to force payment. In Columbus, Ohio, where The Columbus Dispatch reported that even though 90 percent of parents who were behind on lunch payments owed less than $50, a collection agency was dispatched to notify credit ratings agencies of the delinquencies.

Intended consequences: The proposal would also affect students at schools that serve free breakfast and lunch to all students, regardless of their household income. Those are schools in which 40 percent or more of students qualify for free lunch either because they are enrolled in a program like food stamps or because they are homeless, foster or migrant children. There are more than 3,000 schools in California that offer free meals to all students.  A “cascading effect” that could affect this if a large number of children lose their free lunch eligibility. Under the Local Control Funding Formula, schools receive extra funding for each student who qualifies for free or reduced-price school meals, as well as English learners, homeless students and foster children.

Start at the bottom…: Michael Hiltzik of the Los Angeles Times writes: “Republicans and conservatives long have been consumed with the fancy that hordes of Americans are moving heaven and earth to obtain SNAP benefits fraudulently. It’s not as if there’s a pot of gold at stake: The average monthly benefit currently stands at $134.85 for an individual, which works out to about $4.50 per day or $1.50 per meal.” The $90 million to provide meals to kids who’s whole life can be altered by not having enough nutrition is budgetary pocket-change. These opening shots at the most defenseless of our neighbors are just the beginning.

…then work your way up!”: The Trump Administration has plans to dismantle the security of the middle-class as well, privatizing Social Security (remember the $3.4 trillion of retirement savings that disappeared in 2008?) dismantling Medicare/Medicaid and destroying affordable health care. Remember that poem – “First they came for the  people who needed food stamps, and I did not speak out – because I  did not use food stamps…