Being a citizen in the age of Trump is tiring!

Every day, it seems, we need to do something to keep our President and his minions from stealing public assets, extorting foreign countries, torturing kids, or in this case, poisoning us with coal ash to increase profit margins for their friends.

“It is a disgrace to everything the EPA stands for, and we will do everything in our power to stop it.” – Lisa Evans, Earthjustice senior counsel and coal ash expert.

You may have already heard about “coal ash”, the toxic by-product that is left over after the coal is burned. The government calls it “Coal Combustion Residuals (CCR)” and it contains carcinogens, neurotoxins and other toxic substances including arsenic, lead and selenium. And despite reports from utilities of widespread groundwater contamination, and just when some sites are starting to be cleaned up, the Trump-controlled EPA, run by Andrew Wheeler, a “former” coal lobbyist, wants to scale back the 2015 Obama-era rules made in response to documented pollution issues with how coal ash stored or used. The graphic above shows that these have been helpful. Wheeler’s revisions would give coal-burning utilities free reign to spread large volumes of coal ash on land with no requirement to ensure it could be done safely, except in a small number of circumstances. And according to Lisa Evans “To the extent this reduces operating costs, it makes coal more competitive and thus encourages continued coal burning.”

You might remember coal ash because of the nightmare photos of the 2008 coal ash spill at the Tennessee Valley Authority power plant in Kingston Tennessee, when the rupturing of a dike cause more than billion gallons of the toxic sludge to flow into the Emory River. Told that the ash was safe enough to eat, 150 workers worked diligently to clean up the disaster, without any protective gear. What we may not know is that 36 of those 150 workers have already died of pollution-associated illnesses – brain cancer, lung cancer, leukemia, and other diseases, while other survivors struggle everyday with horrific illnesses caused by the toxic ash. The plant is still in operation, burning 14,000 tons of coal a day, and producing 1,400 tons a day of the poisonous residue that killed the workers. 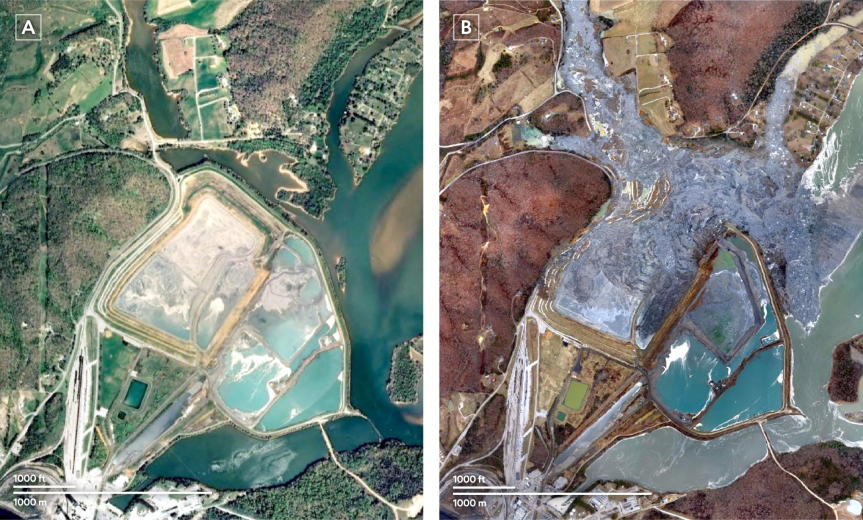 Before and after the spill.

There are more than 1,100 coal ash sites nationwide, dumped in the backyards of power plants across the nation—into open-air pits and precarious surface-waste ponds and the EPA keeps finding more unreported ones. Many of these sites lack adequate safeguards, leaving nearby communities at risk, not just from spectacular disasters like in Tennessee, but from gradual yet equally dangerous contamination, as toxins seeps into drinking water sources or are blown through their streets. In 2012, the EPA discovered that at least 535 ponds (46%) of the known dumps have no liner to prevent seepage of hazardous chemicals.

How dangerous is coal ash? Really? Coal ash pollution contains high levels of toxic heavy metals such as arsenic, lead, selenium, and other cancer-causing agents. The public health hazards and environmental threats to nearby communities from unsafe coal ash dumping have been known for many years, including increased risk of cancer, learning disabilities, neurological disorders, birth defects, reproductive failure, asthma, and other illnesses.

How does it get into us? Even without a catastrophic spill, coal ash can move through a community and its surrounding environment.

What do utility companies say? Utilities have long maintained that coal ash is as safe as sand (which is mostly silicon dioxide, and far coarser than ash) and that its trace concentrations of toxins are not much higher than background levels in the soil. Hahahaha. That’s what they told the Tennessee disaster cleanup workers!

What will this rule proposal do?

The Utility Solid Waste Activities Group, which lobbies on coal-burning waste issues for electric utilities, has pressed TRUMP-EPA to relax provisions of the 2015 rules. In a petition to the EPA, USWAG said it was seeking “a more balanced and cost-effective rule”  that would not jeopardize coal-fired power plants.”

Thomas Adams, executive director of the American Coal Ash Association, said the market for coal ash for construction fill isn’t that large and would be limited by the potentially high transportation costs of hauling ash from remote locations. He also said that increasingly, states are regulating coal ash disposal. “It makes more sense for a state to come up with rules that fit its profile,” Adams said. Since some states wouldn’t do anything, downstream states would be faced with their pollution.

They want to relax rules on how much ash can be used the way dirt or gravel is to level ground or fill in holes or ravines.

EPA also said it would relax some of the safeguards intended to prevent water contamination from that type of ash dumping.

Currently, when 12,400 tons or more of coal ash is used as fill or other purposes, the user must demonstrate the ash would not cause environmental harm. EPA is proposing replacing that cap for triggering the environmental demonstration with location-based criteria—for example, whether it’s to be placed in an unstable area, wetland, floodplain or seismic zone.

However, a reasonably coherent 5th grader can figure out that this revision would mean open season on most sites, for huge loads, because most places are NOT “special” type areas. Essentially, Evans says, if a utility wants to use ash for fill projects it now will not have to report on environmental impacts if the site does not mean meet the special locational factors outlined in the proposal.

“And if you’re not in one of those areas, let’s say you got a vacant lot, or some low-lying farmland or you want to make a parking lot and you want to put 100,000 tons of coal ash down instead of costly clean fill, which is soil, you can do that,” she said.

JINX, we want both! (Or “We choose Option “C. Use Both Mass- and Location-Based Criteria”

Do not suspend groundwater monitoring requirements even if there appears to  no potential for migration of hazardous constituents to the uppermost aquifer during the active life and post-closure care of the CCR unit.

The EPA’s proposal would essentially eliminate the requirement that onsite dry storage waste piles be enclosed if that pile qualifies as a “temporary accumulation,” defined in the proposal as “an accumulation on land that is neither permanent nor indefinite” without setting timeline requirements for disposal. If those time limits are anything like the “temporary” classrooms we went to in high school, which are still there decades later, we know this is just a workaround. “Temporary” piles are susceptible to flooding, tornados, or just normal erosion, leeching their chemicals into the ground, and possible groundwater, for years with no oversight..