Action #1 – Start thinking about your rally signs. Impeachment Rally is this Sunday, 1-3 pm. 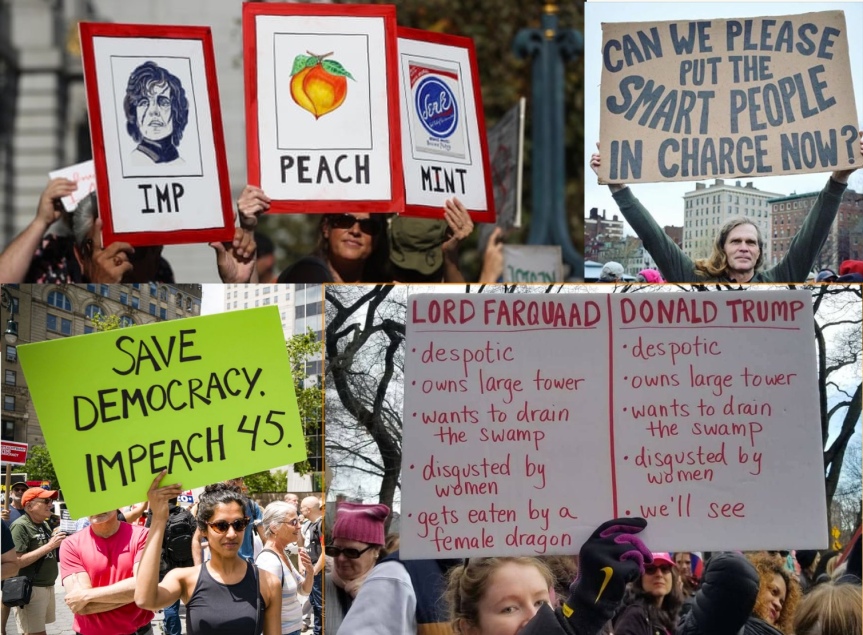 Action #2  – An earthquake is starting in the White House. Shake their phones off the hook.

According to the Hill, “President Trump privately told House Republicans that he is worried about the effect impeachment would have on his legacy, Axios reported Sunday. Trump said impeachment is a “bad thing to have on your resume” in a call with House Republicans…” Former Trump Organization VP Barbara Res predicted that he might resign or make a deal during the impeachment process, rather than face possible removal because he “does a lot to save face.” Give him no comfort or quarter in the People’s House. Call him there.

Minimal script: Good morning! Thanks for volunteering to answer phone calls today. I’m calling to ask that President Trump pay close attention to what happened to Nixon and resign immediately before more of his crimes are discovered. Thanks!

Action #3  – Legislators are not mind-readers. We need to tell them we have their back.

We tell people to call their own legislators often, not just to ask them to vote a particular way, but also to THANK THEM for doing the right thing. Nice people assume that their legislators know that we approve of their work by NOT calling them. We may not realize that the “opposition” calls them every day, sometimes numerous times, with hostile, vitriolic messages. This constant stream of negative messaging, along with pressure from paid lobbyists, causes our legislators to believe that we, the majority of their constituents,  are far more conservative than we are. It’s up to us to correct that impression by taking 10 seconds of our day to call them. Every day. Program your phone for speed so that this task is EASY!! (Downloadable phone list) (I HATE calling. Why do I need to do this? here)

Minimal script for impeachment supporter: I’m calling from [zip code] to thank Rep./Sen. [___] for for supporting the impeachment of President Donald Trump and to ask [him/her] to get back to D.C. early and keep the pressure on the inquiry. We also support Congress taking back its powers of “inherent consent” to force Trump’s collaborators to comply with legal subpoenas. (Check here to see if your representative is already on board. All of ours are!!)

Minimal script for a collaborator/gaslighter/denier: I’m calling from [zip code] to ask Rep./Sen. [___] to support impeachment proceedings, ask President Trump to resign now before he does further harm to this country, or for Rep./Sen. [___] to retire, effective immediately. We realize that this is a hard job and not everyone is brave enough to stand by their oath to the Constitution.

Action #4  – Front-line legislators’ offices are being indundated with hate calls. Send them support too!

We’ve gotten reports that 95% of the calls to Rep. Adam Schiff’s office are negative. You don’t have to agree with everything any particular Democratic legislator has ever done. You could wish they had taken particular actions earlier, or more strongly, or that they had voted differently on a bill. But the other side is pulling together, embracing collusion with foreign powers, fantasies about Biden, and betrayal of our country’s values and our most vulnerable people. So we need to pull together right now too.

Start by gathering thoughts of gratitude for those legislators and staff who are working through this nightmare in order to protect our country from a venal, corrupt tyrant and make a quick call or write a short supportive email. Research has shown that both EXPRESSING GRATITUDE AND RECEIVING IT can have measurable effects on mood and mental health.

These are not our people, so keep calls short or use emails, so we don’t clog their lines.

If you call: I’m calling to tell Rep. [___] and [his/her] staff how much we appreciate and support what [he/she] is doing during this impeachment process.

Background – Why are the calls getting worse?