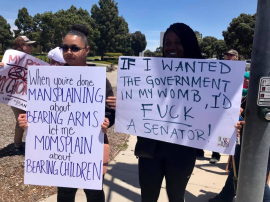 It’s been a busy week!
Part 1 of 2 here:  a modest proposal for states who enact an abortion ban, a great video, a list of pregnancy and birth injuries, & a reading list.

Our Senator Jackson co-authored  SB-24, a bill that allows student health care services clinics on CSU or UC campuses to offer abortion by medication techniques. This allows the over 400,000 female students who may decide they want abortion services to obtain access to that care as easily and as early in pregnancy as possible. The bill was vetoed by Governor Jerry Brown last year. The re-introduced bill has PASSED through the State Senate and has been read the 1st time in the Assembly. It is sponsored by ACCESS Women’s Health Justice, ACT for Women and Girls, ACLU of California, California Latinas for Reproductive Justice, NARAL Pro-Choice California, Students United for Reproductive Justice at Berkeley, Women’s Foundation of California/Women’s Policy Institute.

Why are black women in the US so much more likely to die during pregnancy or childbirth than white women? Harvard Chan's Ana Langer says lack of access to health care, poorer quality care, and the basic societal undervaluing of women of color are factors. https://t.co/s1s5ADYHJN

This is what a REAL pro-LIFE bill looks like! SB-464 – California Dignity in Pregnancy and Childbirth Act is the first legislation in the nation to try to curb the disproportionately high maternal mortality rate of Black women. The bill requires all perinatal healthcare providers, including physicians, midwives, and nurses, to receive an implicit bias training with refresher courses every two years. Although CA leads the nation in best maternal practices overall, a report published by the California Pregnancy-Associated Mortality Review (CA-PAMR) showed that Black women, who make up only 5 percent of the state’s birthing population, still suffered more than a fifth of pregnancy-related deaths. We have to solve this issue, and this bill will help.

Call script for both bills

Action #3 – UPDATE: Mark June 20th on your calendar and come help us reach out to voters and THANK district attorneys!

(From Part 2 of 2) We can see the fallout of the corrupted Georgia elections clearly now…We need women’s rights to win at state ballot boxes!

Indivisible Ventura has signed up to help disenfranchised and inactive voters in GA, North Carolina and other states by signing up with Reclaim our Vote (ROV), a national group working with Black Voters Matter and NAACP. ROV focuses on empowering under-represented voters, particularly in communities of color. We’ll be working on postcards campaigns to help during our Third Thursday group activities – June 20th. ROV is also coordinating text and phone banking campaigns. If you’re not near us, sign up! Update: We will also be THANKING THE GEORGIA DISTRICT ATTORNEYS who have pledged not to comply with Georgia’s new law, which would prosecute women who had abortions. Let’s let them know we appreciate that this law is unenforceable and unlawful. Here are a few prosecutors who will not prosecute women under this law: