Watch this video. Be impressed. Then let’s help her “make good trouble.”

Action #1 – We are Indivisible Against Hate. #IStandWithIlhan, and make sure your legislators have got her back too.

It’s not just about Rep. Omar and it’s not about 9/11. Trump, GOP members and their minions are trying to tear the Democratic House majority apart- by attacking its diverse new legislators, inciting hatred and death threats, and religious dog whistling. They want to herd scared voters towards racism, facism and Islamophobia at the next election, and to incite us into wasting our time and opportunities squabbling amongst ourselves. Right now, we and our legislators need to join hands and clearly share our vision for a better and more just world. #IStandWithIlhan, #StandWithIlhan

Minimal script: I’m calling from [zip code] and I want Rep./Sen.[___] to know that we’re waiting for his/her message of support for Rep. Ilhan Omar and condemnation for those to encourage violence,  racism and Islamophobia.

Minimal email for supporters: Thank you for your public message of support for Rep. Ilhan Omar and condemnation for those to encourage violence, racism and Islamophobia.

Politicizing 9/11 and inciting Islamophobia is wrong, plain and simple, and puts the lives of so many in danger, including my colleague, @Ilhan. Stoking hatred and division is dangerous and repugnant and has no place in the Oval Office — or anywhere for that matter.

For two years, this President has used the most powerful platform in the world to sow hate & division. He's done it again. Putting the safety of a sitting member of Congress @IlhanMN at risk & vilifying a whole religion is beyond the pale. I'll be blunt — we must defeat him.

Missing in action:
We can’t find statements from Rep. Salud Carbajal or Sen. Dianne Feinstein. (Send links to indivisibleventura@gmail.com if we missed them! Contact info at bottom.) 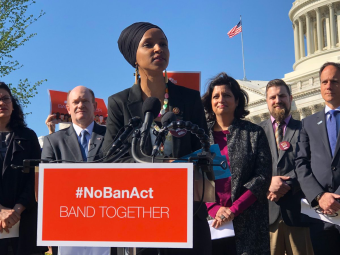 Senator Chris Coons of DE and Rep. Judy Chu of CA, are sponsoring the still unnumbered NO BAN (National Origin-Based Antidiscrimination of Nonimmigrants) Act to block President Trump’s travel ban – or as it’s commonly known, the “Muslim ban.”  The legislation would also address Trump’s asylum and refugee bans and would limit his authority to stop groups from entering the country based on religion, race or ethnicity. He would be forced to apply a more stringent standard requiring ‘credible facts’ and ‘specific acts’ that have actually occurred” to deny entry. Rep. Ilhan Omar is a cosponsor.

I ran on a promise to end the President’s hateful Muslim ban.

And tomorrow we will introduce a bill do just that. No one should be denied basic rights because of their religion, race or national origin. #NoBanAct ✊🏽

“(Omar) is a co-sponsor of the 9/11 Victim Compensation Fund. She’s done more for 9/11 families than the GOP who won’t even support healthcare for 1st responders — yet are happy to weaponize her faith.” – Alexandria Ocasio-Cortez

If your legislator isn’t paying attention, ask them to support H.R. 1327/ S.546– “Never Forget the Heroes: Permanent Authorization of the September 11th Victim Compensation Fund Act.” It didn’t pass last year and now the September 11th Victim Compensation Fund (VCF) is running out of money before its 2020 expiration date, cutting payments between 50-70% at the same time cancer rates among first responders are going up.

Jan 25 – Knock Doors in CA 25 for Christy Smith with Sea Change, Women’s March Action (Info link only: Indivisible Ventura is not a host for this event and does not collaborate with candidates or parties)

Feb 8 – Plastic Pollution in our Oceans with Dr. Clare Steele

Feb 8 – Challenging the Culture of Cruelty with Tim Wise

Feb 16 – Knock Doors in CA 25 for Christy Smith with Sea Change, Women’s March Action (Info link only: Indivisible Ventura is not a host for this event and does not collaborate with candidates or parties)

Feb 22 – Knock Doors in CA 25 for Christy Smith with Sea Change, Women’s March Action (Info link only: Indivisible Ventura is not a host for this event and does not collaborate with candidates or parties)

Feb 29 – Knock Doors in CA 25 for Christy Smith with Sea Change, Women’s March Action (Info link only: Indivisible Ventura is not a host for this event and does not collaborate with candidates or parties)