Read this article. It’s a great primer to understand the scope of this issue.

Right after El Chapo’s trial made it completely clear how useless a border wall would be, right after both New Mexico and California withdrew their guard troops as unnecessary, and in the face of a spending bill that reflected that reality, our president has decided to take a huge authoritarian leap forward with a declaration of a national emergency. This is a deliberate end run around Congress and our country’s system of checks and balances, all to appease his voting base. 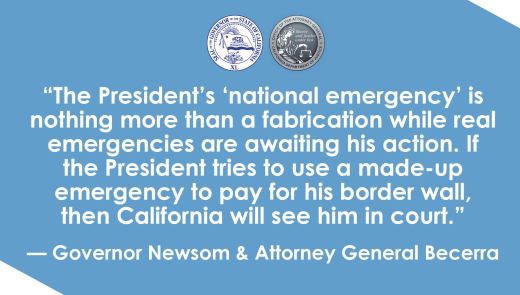 …we have work to do…

Action #1 – Tell Nancy Pelosi we expect her to bring her “A” game with this petition.

Those of us who aren’t in Senator Pelosi’s district can’t call her or email her. However, we can add our names to a petition to demand that she push back hard against this racist and anti-immigrant policy. Sign the petition here.

Action #2 – Tell our legislators to vote immediately for a resolution of disapproval to stop Trump’s revenge move.

Under the National Emergencies Act of 1976, the president can declare an emergency for just about anything. However, Congress gave itself the ability to terminate an emergency declaration. It’s only been tried once, when President George W. Bush tried to use an “emergency” to override federal wage requirements for government contractors rebuilding after Katrina. While the lawsuits against the administration are warming up…

Minimal Script: I’m calling from [zip code] and I want Rep./Sen. [__] to immediately vote for a resolution of disapproval for the president’s false declaration of an emergency to force through funding for a useless wall.

(Note: For your senator calls – add in your approval for the RAIDER Act from Action #3 (below) and save time!)

Action #3 – Tell our legislators we approve of the RAIDER Act of 2019!

Washington—Sens. Feinstein, Harris and others have just introduced legislation to prevent the president from using the National Emergencies Act of 1976 to raid critical military construction, water infrastructure and disaster response funds to build a border wall. It’s called the Restrictions Against Illegitimate Declarations for Emergency Re-appropriations (RAIDER) Act of 2019. Text of the bill here.

.@senatemajldr: "I've just had an opportunity to speak with President Trump…he's prepared to sign the bill. He will also be issuing a national emergency declaration at the same time." pic.twitter.com/iukGKjmoZ8

If the president can declare a national emergency to circumvent laws he doesn't like, it's very hard to see what the limits are. And if you have a president as authoritarian as Trump is, that is a truly frightening prospect. pic.twitter.com/qqKsx3Yemt

Declaring a national emergency over this President's vanity project is ridiculous. We don't need a wall. Instead, we should address the actual emergencies facing our country — everything from gun violence to the opioid crisis.

Donald Trump's ridiculous wall is not an emergency.

An outrageous abuse of power—not to mention waste of taxpayer dollars—if he goes through with this ludicrous idea. Drop the absurd wall and do your job. https://t.co/kEWdIXjNjr

Trump’s inability to follow through on a campaign promise is not a national emergency.

Let’s not forget those still struggling to rebuild their lives after this administration failed to respond effectively to real emergencies in places like Puerto Rico. https://t.co/NMSRnvKJQF