…which is the great majority of us when we remember our power and come together.”

Ventura County residents came out yesterday, with ferocious signs and a lot of spirit, to say that we expect better of our president and the legislators that protect him.

And we were not alone.

People joined in nearly 200 Confront Corruption – Demand Democracy vigils and rallies nationwide yesterday in 39 states, Washington D.C. and Puerto Rico with thousands if not tens of thousands participating. (Tweets, videos and articles relating to  other events the happened yesterday are attached below the photos of our own rally.)

We are not done.

“Helsinki was the last straw! – Ventura Confronts Corruption” – The photos!

If you have photos you’d be willing to share, we’d love to have them. Please send them to indivisibleventura@gmail.com.
KEYT coverage here. 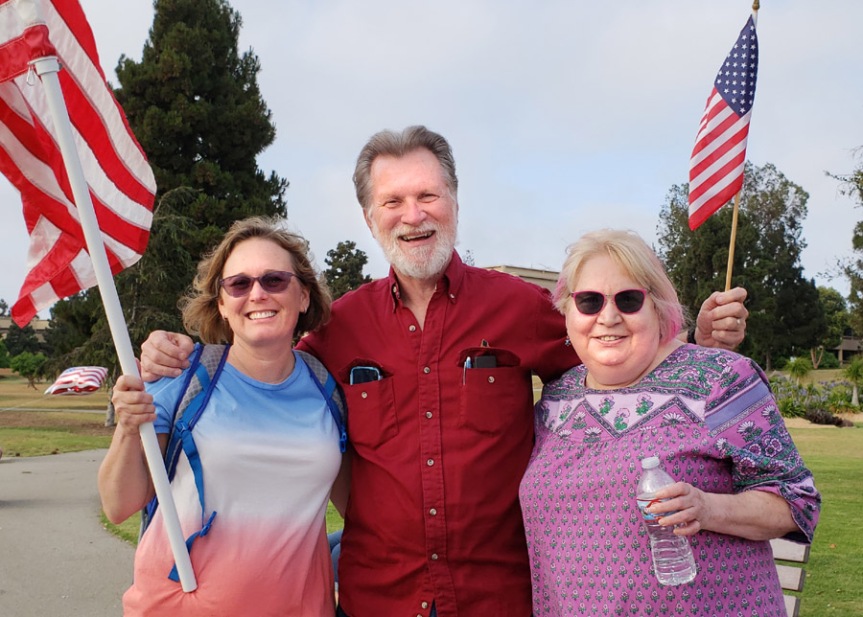 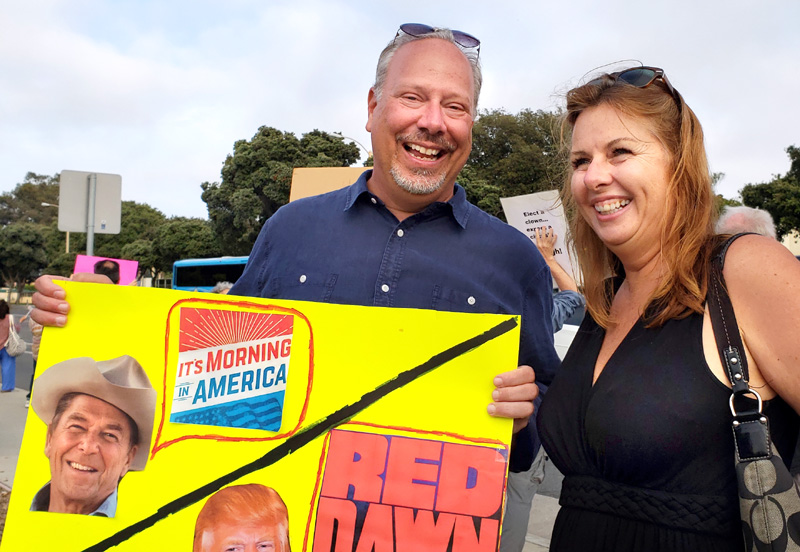 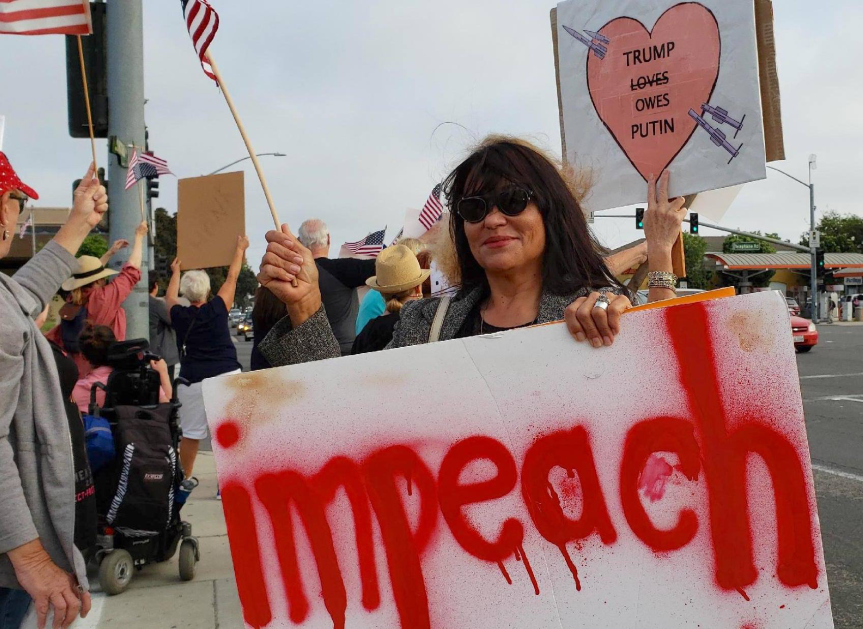 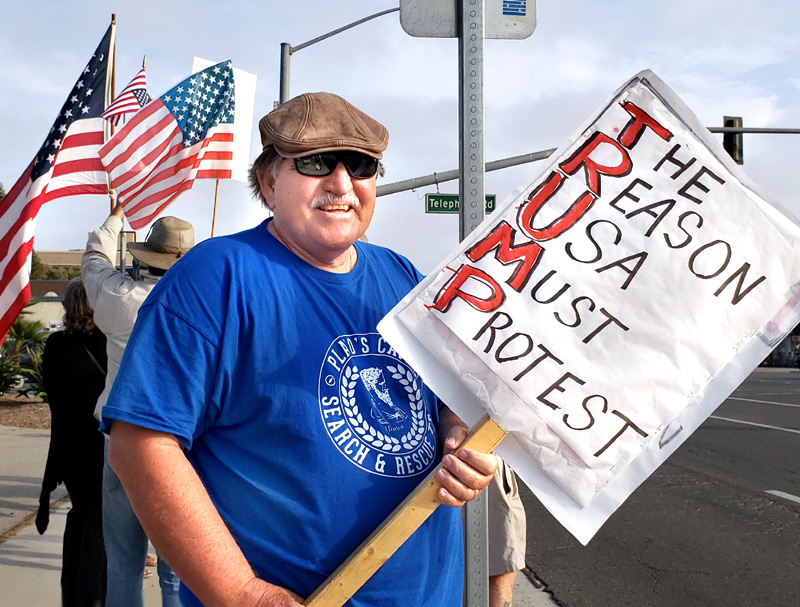 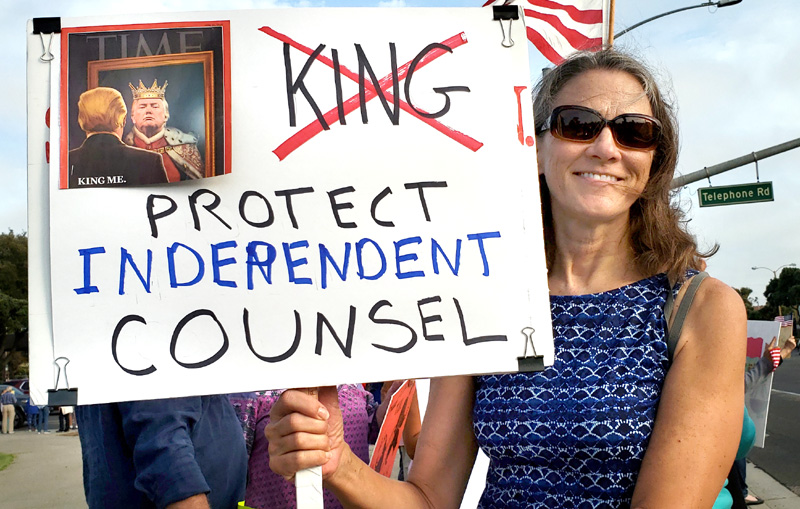 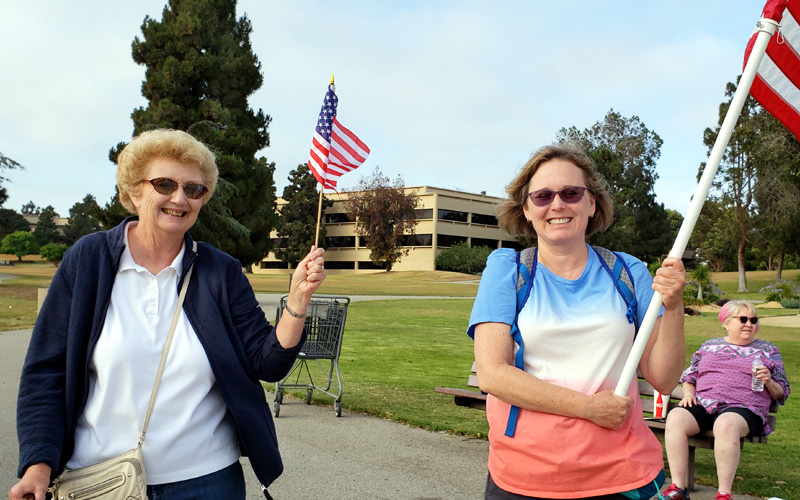 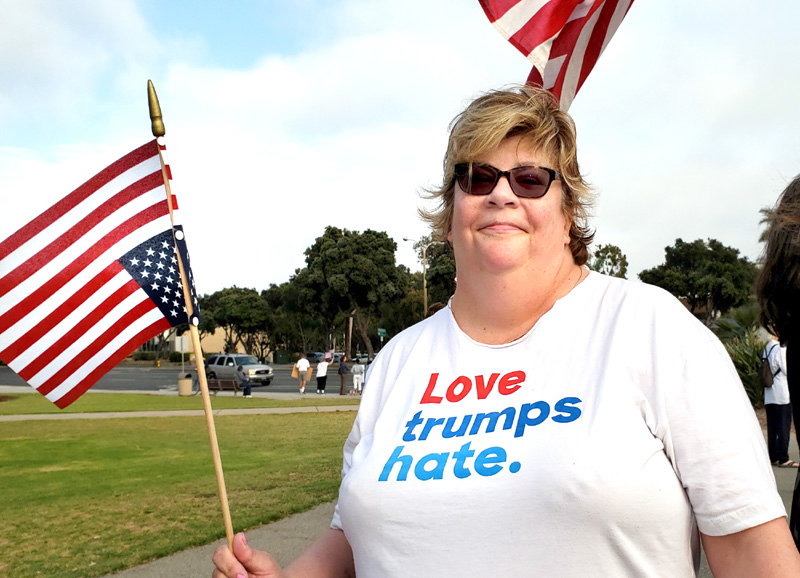 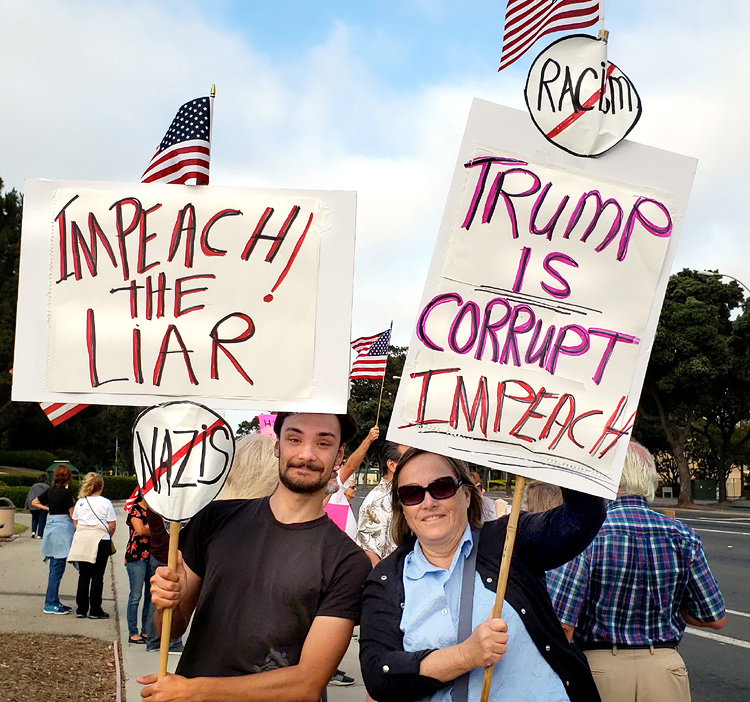 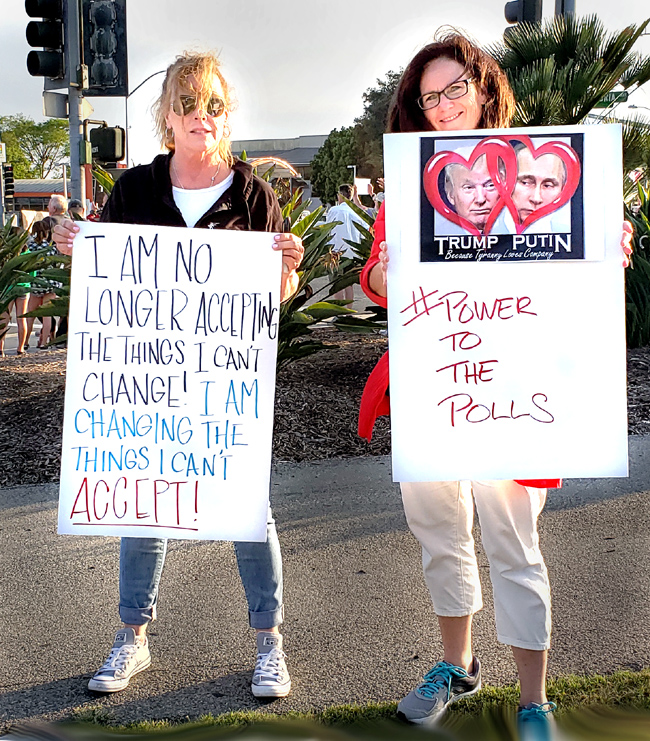 Compiled by “Democracy is For People”, organizers of this nationwide event.

Rachel Maddow Show
“We are told that more than 60 cities and towns across the u.s. will be holding candlelight vigils tomorrow under the headline of “Confronting Corruption and Demanding Democracy.” In the wake of Special Counsel Robert Mueller’s indictment charging 12 Russian Intelligence officials with interfering in our election. We expect the largest city in the country will be the largest event maybe. New York’s Times Square will be holding an event but there’s also again as I said more than 60 events planned nationwide everywhere from Indiana to Muncie, Indiana to Brownsville, Texas. 8:00 p.m. tomorrow night. We’ve been watching a short of national freak-out over the last couple days. Tomorrow we’ll see some of that made manifest with these vigils. Stay with us.” MSNBC.com (NAT) *Third clip

Protesting the President: Anti-Government Demonstration Held In Cities Around The U.S.
“Anti-Trump protesters flooding Times Square to criticize corruption in the government. Lots of people, this protest in New York City one of dozens to confront corruption, protests held around gathering near the White House with signs accusing the president of treason and calling for his impeachment.” ( Fox News Channel: Fox and Friends (NAT))

Widespread protests on tap after Trump show of servility to Putin
Rachel Maddow reports on planning for a “Confront Corruption: Demand Democracy” protest taking place in scores of cities around the United States in response to Donald Trump’s behavior toward Vladimir Putin. (Yahoo! News! (NAT))

Protesting the President: Anti-Government Demonstration Held In Cities Around The U.S.
(1:30) “Anti-Trump protesters flooding Times Square to criticize corruption in the government. Lots of people, this protest in New York City one of dozens to confront corruption, protests held around gathering near the White House with signs accusing the president of treason and calling for his impeachment.” (Fox News Channel: Fox and Friends (NAT))

Anti-Trump protests outside White House, in Times Square decry DC ‘corruption’
Demonstrators protesting President Trump and his administration gathered at rallies in cities across the country on Wednesday with a goal to “confront corruption and demand democracy.” (Fox News.com (NAT))

LTE: We Must Demand Democracy
We can’t just stand by helplessly. The call for all Americans to unite to confront destructive, negative forces and demand democracy be protected gave this article the positive message we need in these divisive times. (Dallas Morning News (Texas))

Protesters to ‘Occupy’ Lafayette Park Against Trump for Third Night
A 13-member mariachi band is expected to be at the protest Wednesday, which starts at 8 p.m. Parkhomenko said on Twitter that he spoke with someone by phone about the performance. (WRC-TV (NBC Washington))

Large group gathers outside of White House to protest Trump for third straight night
Wednesday night saw what was reportedly the largest of three straight nights of protests outside the White House. (WJLA-TV (ABC Washington))

Lawmakers join protest outside White House amid Russia fallout
The event, which also voiced support for special counsel Robert Mueller’s Russia probe, was the third straight night of protests — and came two days after Trump appeared to side with Putin on the issue of Russian electoral meddling at Monday’s summit in Helsinki. (United Press International (NAT))

Anti-Trump protesters hold candlelight vigil by White House
Protesters chanted “Vote them out!” and “Lock him up!” during the rally. And the hashtag for the event #ConfrontCorruption trended at number one in the Washington area. (The Hill (D.C.))

Watch Live: Anti-Trump, Pro-Hillary Protest to Protect Mueller Investigation
A “Who’s Who” of left-wing, anti-Trump groups are sponsoring a protest at the on Wednesday night, and several Democrats are scheduled to speak at a “candlelit vigil at the White House to confront corruption and demand democracy.” (Breitbart (D.C.))

Impeachment itch — the Left fights its urge to scratch
But instead of increasing impeachment drumbeat, outside Democratic groups have primarily stuck to their talking points: Trump is corrupt, the GOP voted to repeal Obamacare, immigrant children are still being detained, and the president is too cozy with Russia. (Washington Examiner (D.C.))