And we don’t have much time.

Latest anti-democratic news from the Nazi-symbol stage at CPAC: “As local and state Republicans seek to narrow access to the polls, Trump, who tried to force officials in Georgia to steal the election for him, called on the GOP to outlaw mail-in and early voting to ensure “honest elections” and made racially motivated insinuations about irregularities in Detroit and Philadelphia. He demanded citizen tests for ballot access, said voting should only take place on Election Day and called for independent judges to be barred from adjudicating election disputes.”

H.R.1/S.1, first introducted in 2019, is a collection of reforms to campaign finance, voting rights, and government ethics for ALL THREE BRANCHES of government, including the presidency and the judiciary. After Trump’s real-time master class in corruption, we need this bill’s stronger guardrails more than ever. “Norms” are no longer good enough. H.R. 1 is an important first step towards building an equitable and functional democracy, along with the D.C. statehood bill and H.R.4 – John Lewis Voting Rights Act, without which we can’t achieve any of our other progressive goals.

(This helpful video below, from 2019, is a great conversation with the bill’s author, Rep. John Sarbanes (D-MD-3). Short explainer videos from him on this bill here.)

Minimal script for Reps: I’m calling from [zip code] to thank Rep. [___] for cosponsoring and supporting H.R. 1 – the For the People Act and I urge [him/her] to work to swiftly pass this legislation. PASSED 3/3/2021

Minimal script for DEM. senators: I’m calling from [zip code] to thank Sen. [___] for cosponsoring and supporting S.1– For the People Act. Addressing corruption, the protection of voting rights, and reforming of campaign finance should be bipartisan priorities to make our democracy better for all Americans, regardless of their political affiliation. But if the pull of our ex-president proves too strong for GOP senators’ consciences or memories, please use a targeted filibuster to add back the necessary guardrails that went missing during Trump’s reign of corruption for all three branches of government.

Minimal script for GOP senators: I’m calling from [zip code] to ask Sen. [___] to support S.1– For the People Act. Addressing corruption, the protection of voting rights, and reforming of campaign finance should be bipartisan priorities to make our democracy better for all Americans, regardless of their political affiliation. Those GOP senators who were ready to adjust electoral votes on Jan. 6th have already proven that they have no issues with federal oversight of elections. Make elections fair for everyone.

Here are its supporters in the House. Brownley or Carbajal are now both cosponsors. On the Senate side, this legislation is co-sponsored by every member of the Senate Democratic Caucus, including both our senators, Feinstein and Padilla.

Sign up here. Common Cause hase phonebanks on Monday, Thursday, Saturday and Sunday at 6pm ET/3pm PT every week to make calls together on the For the People Act (HR1/S1). This historic bill will eradicate gerrymandering, enact automatic voter registration, and get money out of politics. Please sign up here to connect voters directly with their lawmakers.

More things to do – Become a social media monitor!

More things to do – Textbank shifts!

Sign up here. We have textbanks on Monday, Tuesday, Wednesday, Saturday at 12pm ET/9am PT every send thousands of texts to people in key states to ask them to make calls in support of the For the People Act (HR1/S1). Sign up below to connect voters directly with their lawmakers.

More things to do – Send a letter to the editor of your local paper.

Indivisible has put together a template to help you get started here.

Do it here. Lots of examples and a “how-to-make-a good-video” video.

This is a VERY LONG BILL, so here are some ways to approach it.

Here are just a few of the reforms in HR 1: 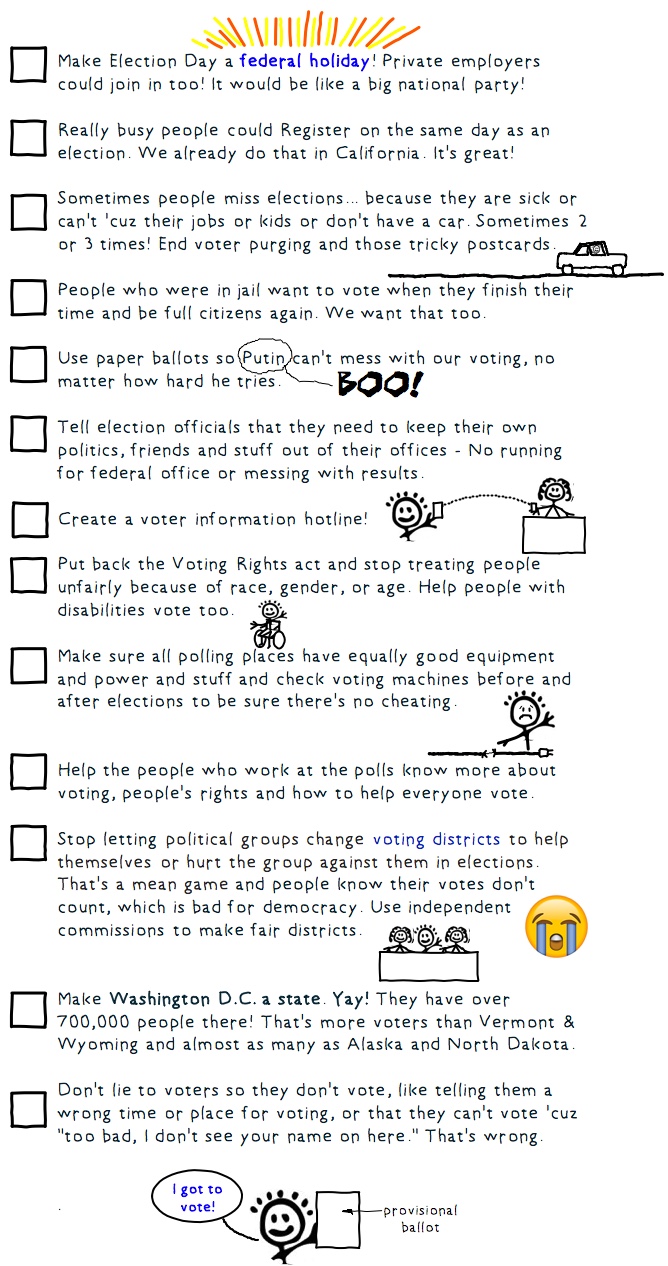