Andrew Brasher, a rightwing extremist, is up for a lifetime judicial seat in the 11th Circuit Court. Call your senators!

The non-trial is over and McConnell isn’t wasting any time.  He’s only guaranteed until November to turn the judicial branch into a extremist right-wing rubber-stamp for Trump’s policies.  At the beginning of Trump’s reign, lawyers told us that we shouldn’t worry about young extremist Trump-udges, that essentially they would fall in line with the years of precedent that was slowly moving America towards a more just nation. Um, no. Even before Trump, there were huge setbacks, such as 2010’s Citizens United v. FEC, and in 2013, parts of the Voting Right Act (Shelby v. Holder). Now the march back to the 1950’s has accelerated, as these new judges are pushing off the guardrails and starting to deliver on their destructive potential. (See “Deep Dive” below)

Per the Hill, the Senate is expected to take its first procedural vote on the slate Monday evening, on Andrew Brasher’s nomination to be a judge on the 11th Circuit, the court that oversees federal cases originating in the states of Alabama, Florida and Georgia.

Andrew Brasher is so disturbingly extreme that his confirmation has been opposed by the Leadership Conference on Civil & Human rights. Alliance for Justice, The National Council of Jewish Women, the AFL-CIO, the NAACP Legal Defense Fund, The League of Conservation Voters, People for the American Way, Lamba Legal, National Urban League, and NARAL Pro-Choice America.

Meet Andrew Brasher – an extremist who wants a lifetime gig on the US Court of Appeals for the Eleventh Circuit. 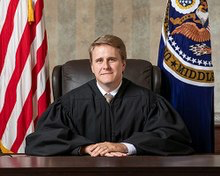 He has only been a district court judge for six months. In that time, he has presided over just three trials that have gone to judgment; none of which were criminal matters. He has not written a published decision or an opinion concerning significant constitutional issues.

However, in his capacity working in Alabama’s Attorney General’s office, he has demonstrated that he is an ultraconservative extremist. In both his professional and personal capacity, he has opposed voting rights,  rights for women, communities of color, the LGBTQ community, organized labor, consumer and environmental protections. He is a member of the extremist Federalist Society (we wrote a post about it here), and coordinated with both Beckett Fund and the Alliance Defending Freedom, anti-LGBTQ organizations labeled as hate groups by the Southern Poverty Law Center.

And best of all for the GOP…he’s only 38 years old!!! Decades of repression, suppression and injustice ahead. Here’s a summary of what he’s dedicated his life to so far:

The damage has already begun. These examples are from pfaw.org. Read their full report here.