Up in the Santa Monica Mountains, P-47 was just going about his job. The mountain lion, studied by researchers since he was 4 weeks old, was part of an ecosystem that keeps rodent populations under control. However, due to eating prey animals dosed with anticoagulant poisons, internal bleeding caused him to die a slow and painful death.

AB 1788 – Pesticides: use of anticoagulants. Anticoagulant rodenticides (rat poison) indiscriminately destroys ecosystems and poisons native wildlife such as bobcats, coyotes, mountain lions, owls and hawks. These rodenticides are also one of the top ten pet toxins, injuring or killing household pets who eat either affected rodents or the bait itself. In addition, more than 4,400 children under age 6 were poisoned with these long-acting toxins in 2016, which disproportionately harmed those from low-income families. (More information from Project Coyote and Marilyn Krieger’s article “Rat Poisons Aren’t Selective” here.) We can do better.

This bill has passed the Assembly and is now in the Senate Natural Resource and Water Committee. Senator Jackson is on it, along with Senators Stern, Jones, Allen, Borgeas, Caballero, Hertzberg, Hueso, and Monning. They’ll be voting Tuesday morning (7/9), so get your call in today.

One call does it all! See the combo-script under Action #2 below! 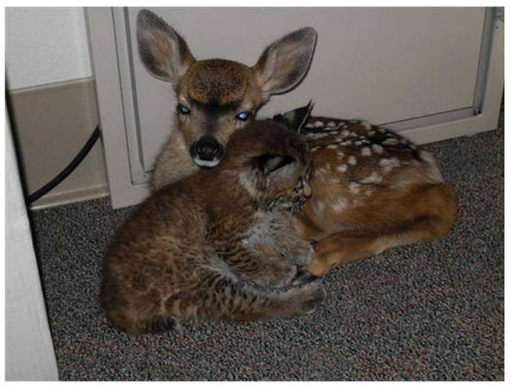 Many people saw this picture of a bobcat kitten and a fawn, who had been rescued from Santa Barbara’s 2009’s Jesusita Fire. During the mayhem, rescuers were forced to put animals anywhere they could, since they had run out of crates. The kitten ran to the fawn, and it was instant bonding

AB-1254 – Bobcats: take prohibition. Bobcats, at 16-30 pounds, are just a little larger than most housecats. Along with mountain lions and condors, they are part of the iconic wildlife of California and play an important role in the maintenance of a healthy ecosystem. In 1998, voters passed Proposition 4 to ban the use of steel-jawed, leghold and other body-gripping traps used to capture and hold wildlife, including bobcats. In 2012, the California legislature banned the cruel hound hunting of bobcats and black bears. Legislators quickly followed up with the passage of the Bobcat Protection Act in 2013, which limited bobcat trapping. In 2015, the CA Department of Fish and Wildlife banned commercial and recreational bobcat trapping altogether in. Despite these protections, “trophy” hunters have managed to kill more than 10,000 of them over the last decade. AB-1254 would close this ridiculous loophole in CA before bobcats are pushed to the brink of extinction. (More information from Project Coyote and the Humane Society.)

This bill also in Senator Jackson’s Natural Resource and Water Committee and is up for a vote on Tuesday, the 9th.

Minimal combo-script: I’m calling from [zip code] and I would like Senator [___] to vote YES on AB-1254, which bans cruel and senseless bobcat trophy hunting in our state AND YES on AB 1788, a bill to limit the use of anticoagulant rodenticides (rat poison), which destroy ecosystems and indiscriminately poison native wildlife who eat poisoned rodents.