“The Jungle” per Wikipedia, published in 1906, “depicts working-class poverty, the lack of social supports, harsh and unpleasant living and working conditions, and a hopelessness among many workers. These elements are contrasted with the deeply rooted corruption of people in power. A review by the writer Jack London called it “the Uncle Tom’s Cabin of wage slavery.” (Download free version here.)

Upton Sinclair was disconcerted that instead of focusing on the unequal fight between workers and owners, the public was more interested in his descriptions of the health violations and unsanitary practices in the American meatpacking industry. The uproar inspired by his book led to the “Meat Inspection Act“, and later, the Pure Food and Drug Act.

“I aimed at the public’s heart, and by accident I hit it in the stomach.” 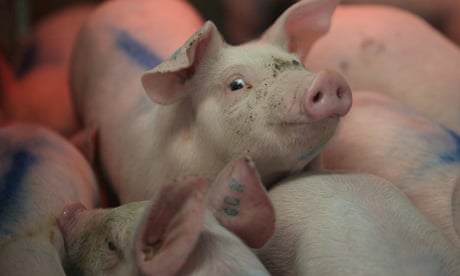 “A review of five plants that served as a pilot for this proposal reveals there were more food safety violations in these plants than in others. Additionally, a recent review by the USDA’s own office of inspector general found that the agency failed to provide adequate oversight of those plants, and the pilot plants may have a higher potential for food safety risks.” (guardian)

The USDA issued this proposal without any final review of the impact on public health and has not released all the data that supposedly supports the proposal. Clearly, the real goal of this proposal is to allow the meat-packing industry to increase its profits. It’s all about lining the pockets of a few corporate executives – at the expense of consumer health, worker safety and animal welfare.

We urge the USDA to consider the millions of lives – consumers, workers and animals – they are placing at incredible peril. They should reject any increase in line speeds and withdraw the so-called modernization of swine slaughter inspection rule.

Public uproar has led to two extensions to the comment period, the new deadline is May 2nd, TOMORROW!

Check out other people’s comments here.

Comment: I am a U.S. citizen and VOTER. I strongly oppose the Modernaization of Swine Slaughter Inspection proposed rule. There is nothing “modern” about turning over inspection duties and responsiblities to the very people and businesses that it is YOUR JOB PAID FOR BY TAXPAYERS to do! When you let those you are charged to inspect, inspect themselves it is an invitation to lying, cheating, corruption etc. Didn’t you ever read The Jungle by Sinclair Lewis? Having seen the videos of what happens to these pigs under this slaughter system, you are endorsing a dangerous lack of safety/hygiene for the food supply of our country, potentially harming the health of the consumers IT IS YOUR JOB TO PROTECT. And you are facilitating needless cruelty to animals. Honestly, what the hell is wrong is with you? This is just another example of government agencies being corrupted by the industries they supposed to be regulating and keeping honest. It is YOUR JOB to inspect these slaugtherhouses to prevent health risks and animal cruelty. DO YOUR DAMN JOB. Kill this bill.

Comment: I oppose this proposal. With this new rule, slaughter speeds could reach up to 1,300 or even 1,500 pigs per hour. These speeds are virtually guaranteed to have torturous effects on the animals being rushed through the lines.

Among the many risks to animal welfare, faster slaughter could prevent plant workers and inspectors from identifying pigs who were not adequately stunned and are still conscious on the processing line. This is a horrific ending for these animals, and unacceptable to me. For this reason I oppose the proposal to allow faster slaughtering of pigs.

Comment: I STRONGLY oppose the Modernization of Swine Slaughter Inspection rule, which endangers animals, consumers, and American workers. Under this dangerous rule, the New Swine Slaughter Inspection System (NSIS) would give slaughter plants free reign to kill at irresponsibly high speeds with severely inadequate oversight. An investigation by Compassion Over Killing of a pilot high-speed slaughter program exposed pigs dragged, kicked, excessively shocked, and improperly stunned by workers who struggled just to keep up — risking their own safety in the process. I urge you to abandon this cruel and reckless proposal, for the good of pigs and humans.

Comment: I condemn the USDA’s plan to allow pig slaughterhouses to kill pigs at “any speed deemed safe for food safety.” This makes animals vulnerable to rougher handling and to being butchered while still conscious.

This decision will say much about our country…as an American I’m hoping my country will make the right decision, the humane decision.

Comment: This is horrific and the public in general are wanting to less non ethical practice like the meat trade not such animal rights activists, there is more awareness more than ever the negative effects of meat consumption and plant based sales are soaring for alternatives, these animal are being tortured pigs are highly intelligent and emotional beings this is beyond cruel, we are neither than this, slaughter needs to reduce not increase!

Apr 25 – Santa Barbara Courthouse: We Keep Us Safe, a call to mourn those taken from us and to end rampant police violence

Cancelled due to Covid concerns. See you (hopefully) soon, but please check back for verification – in the meantime please call El Concilio @  805-486-9777 – Free IMMIGRATION LEGAL AID Fair – Volunteers Needed! Every last Sunday of the month we assist residents, alongside immigration lawyers, in filling out paperwork for citizenship, DACA (click here for up-to-date DACA info) and green card renewals. Can’t make it? Help fund this event

Apr 26 – Online: Make the leap from enjoying nature to protecting it: Instagram Live with Sierra Club

Apr 26 – Online: For the People Phonebank with Common Cause – Help pass Voting Rights!

Apr 28 – Online: No Renter Left Behind: Securing a Just Recovery for All Californians

Apr 28 – Online: Everything Electric! A fun chat with drivers with vehicles that fit their lifestyles

Apr 29 – Online: Plan Ventura – General Plan Workshop: How should Ventura evolve over the next 20-30 years?

Apr 29 – Online: No Justice: A Panel Discussion on State Violence and the Black Community

Apr 29 – Online: For the People Phonebank with Common Cause – Help pass Voting Rights!

May 1 – Literature Drops in CA-25 – Door hangers and personalized notes – Help take back this congressional district!

May 1 – Online: Why Building Back Better with Unions Matter: There’s work to be done!

May 1 – Online: For the People Phonebank with Common Cause – Help pass Voting Rights!

May 1 – Online: Postcarding with Laurie – Register Democrats in Flippable Districts!

May 2 – Online: For the People Phonebank with Common Cause – Help pass Voting Rights!

May 6 – Online: For the People Phonebank with Common Cause – Help pass Voting Rights!

May 8 – John Lewis Voter Advancement Day of Action Votercade – Hands off our vote!

May 8 – Literature Drops in CA-25 – Door hangers and personalized notes – Help take back this congressional district!

May 8 – Online: Postcarding with Laurie – Register Democrats in Flippable Districts!

May 10 – Online: For the People Phonebank with Common Cause – Help pass Voting Rights!

May 14 – Online: Bystander Training: Learn how to effectively intervene the next time you see Anti-Asian/American harassment online or in person

May 15 – Online: Postcarding with Laurie – Register Democrats in Flippable Districts!

May 20 – Online: Bystander Training: Learn how to effectively intervene the next time you see Anti-Asian/American harassment online or in person

May 20 – Online: For the People Phonebank with Common Cause – Help pass Voting Rights!

May 22 – Online: Postcarding with Laurie – Register Democrats in Flippable Districts!

May 24 – Online: Bystander Training: Learn how to effectively intervene the next time you see Anti-Asian/American harassment online or in person

May 27 – Online: For the People Phonebank with Common Cause – Help pass Voting Rights!

May 29 – Online: Postcarding with Laurie – Register Democrats in Flippable Districts!

June 7 – Online: For the People Phonebank with Common Cause – Help pass Voting Rights!