Maybe she’d better hold off on squandering the $78 total on a Costco membership. She may need to save it to offset higher medical bills, or the loss of all the “entitlement” programs Paul Ryan is planning to slash… 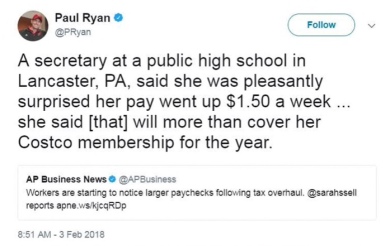 The House is expected to vote on a “balanced budget” amendment after they return from recess. It is expected that the amendment would have no chance of passing, since it would need Democratic votes, then ratification by three-fourths of the states in the U.S. However, we should take nothing for granted.

(Wapo) “A balanced-budget amendment to the Constitution would require that every year the federal budget would have to be balanced, no matter what: no borrowing, not a dollar more spent than the government receives in taxes. It’s one of the worst ideas anyone in Washington ever had, but it’s particularly absurd coming from the GOP.” Republicans have pursued the same three-part budgetary strategy they did under Presidents Ronald Reagan and George W. Bush, which naturally produces large deficits.

Here’s a reminder of how we got into this mess…

The strategy of using language like “balancing the budget” makes the GOP finally appear to be fiscally responsible again after their tax giveaway to the rich. Speaker of the House Paul Ryan has noted that if spending were to be cut, “entitlements reform” – cutting back social services that the middle class and poor depend on like Medicaid and Medicare, would be first on the block, not rollbacks of any of the tax benefits he and his friends are now enjoying.

The GOP deficit isn’t as much of a problem for most of us as the loss of our safety nets, because it’s “when, not if” the next recession, or even depression, is around the corner. Not only is the current economic expansion already the third longest since the middle of the 19th century, but a number of factors that can start a recession are already here. Others are one news story away.

Action #1: Call your legislators and make sure they’re ready to vote Paul Ryan back into his seat. We were surprised by the number of Democrats that signed on for the recent lunatic bank deregulation bill, so take nothing for granted here.

Minimum script: I’m calling from [zip code], and I want Rep. [___] to vote “NO” on any measure to require a balanced budget or that slashes our safety-net programs.

Action #2: There should be consequences for being willing to risk the health and welfare of the majority of Americans for a concept of “small government”. Let’s help remove Paul Ryan before someone gets hurt. Give what you can to this guy here.

For those who like visual calendars, we’ve translated our activities and those of our compatriots into a graphic calendar…

CANCELED, but contact us to get your at-home materials! Third Thursday – pizza, camaraderie, and postcards!  Can’t make it? Help fund this event

Apr 23 – UU the Vote Letter Writing to Voters in Georgia

Apr 30 – UU the Vote Letter Writing to Voters in Georgia