“There is no safe level of air pollution.” (Newsweek) (BusinessInsider) (LATimes)

“…a growing body of evidence suggests that exposure can also harm the brain, accelerating cognitive aging, and may even increase risk of Alzheimer’s disease and other forms of dementia.” (Sciencemag)

“Expanding extraction of dirty fossil fuels on our public lands threatens the health of our communities and the future of our climate,” said Monica Embrey, a senior campaign representative at the Sierra Club. “We will push back every step of the way against this reckless plan to subject more of California’s lands, wildlife, and communities to fracking.” (CBD)

What they say in the EIS…

HOW MANY WELLS ARE WE TALKING ABOUT, ANYWAY?: (pg 2) “The RFDS projected the exploration, drilling, and production activity that would likely occur in the next 10 years, the anticipated life of the 2014 RMP. This was predicted to be approximately 100 to 400 federal wells to be drilled on federal mineral estate per year during the life of the 2014 RMP. This includes 90 to 360 wells per year on existing leases issued and 10 to 40 wells per year on new leases issued subsequent to the 2014 RMP approval date. Some of these wells were expected to be hydraulically fractured.”

First off, it is really hard to know how many will really occur and whether they will be conventional or fracking. The BLM start out with a guiding estimate…

(pg. 44) “The projected emissions included in the 2012 Final EIS are based on conventional well development for 400 wells over the 10-year period of the 2014 RMP, or an average of 40 wells per year on new leases. (Or more…It doesn’t say “maximum”) The analysis in this section projects the emissions of a maximum of four conventional wells that are also hydraulically fractured per year over a 10-year period.” (It projects an arbitrary number of 40 fracked wells out of 400 total over 10 years for the purpose of creating estimate tables. It doesn’t actually limit itself to 40.)

… (Pg. 53) “Emission factors based on per-well analysis are used in conjunction with a maximum new well development of an average of four new hydraulically fractured wells per year over the 10-year life of the plan.” (What is the maximum of an average?)

We disagree with their analysis. In Kern County, California’s major oil-producing county, 50 percent to 60 percent of new oil wells are fracked, according to estimates by Halliburton. And fracking may have been done elsewhere in California, since state officials haven’t monitored or tracked the practice until recently. If 40 wells are “allowed” a year, there could be 20 to 24 fracked wells, and 200 to 240 in 10 years.

(Pg. 52) “…Therefore, the potential impacts from the approximately 40 new hydraulically fractured wells are estimated based on hydraulic fracturing assumptions carried forward throughout this Draft Supplemental EIS. This analysis follows the methods and assumptions used for a similar analysis developed in the Central Coast Field Office Draft RMPA/EIS (BLM 2017)”

LET’S DISCUSS EMISSIONS: We’ll start with their low-ball scenario of an average of four new hydraulically fractured wells per year over the 10-year life of the plan.

This language is deceptive, minimizing the damage that any well drilling poses. The emissions number is based on the ADDITIONAL greenhouse gas load over the amount already calculated for a conventional well. (See page 55, Table 4.1.1)  As you can see from Table 4.1.2 below, the real story is that emissions from hydraulic fracturing more than doubles the projected NOx emissions from 2.18 tons/year to a project total emissions increase of 4.92 tons/year. This is for an “average” of 4 wells a year, based on “past behavior of drillers”. 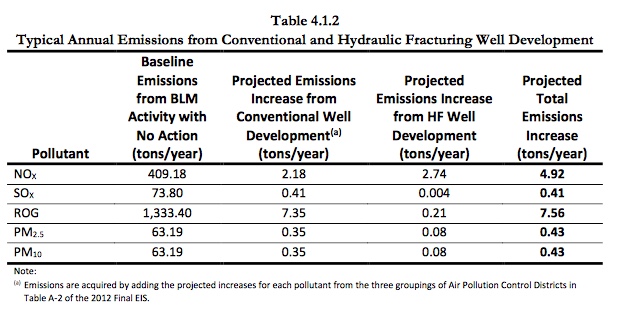 Projected emissions from hydraulic fracturing typically increase above inventory, by pollutant, as follows:

Table 4.1.3 (Pg. 57) states that the estimated greenhouse gas (GHG) emissions during development over the 10 years (of new wells construction and hydraulic fracking of four wells per year) = 779.2 MTCO2e per year

SO WHAT’S THE  LIFETIME EMISSIONS FOR THE ESTIMATED 400 WELLS?

It specifically doesn’t quantify GHG for conventional well development in the 2012 Final EIS. Why not?

BLM’S ESTIMATES OF GHG MAY BE LOW…

Report card of California air quality by district already: here (based on high ozone days). California is rated as having the “highest ozone levels” and “worst smog levels” in the country.

According to the ARB, 80,000 deaths that occur each year in California may be attributed to illnesses aggravated by air pollution. While air pollution affects everyone, some people are more susceptible to its effects than others. Research has established that air pollution: