McConnell just signaled weakness on TrumpCare. You may not know it, but you just dealt another BIG blow to TrumpCare. Today, Senate Majority Leader Mitch McConnell announced he is delaying the start of the long August recess by two weeks.

So what’s the big deal? August recess is a longstanding tradition in Washington, D.C. Members of Congress and their staff LOVE this extra-long, 5-week break. It is a precious change of pace they look forward to all year.

The fact that McConnell cut into August recess is a HUGE deal — a drastic and incredibly rare step to take. It means he doesn’t have the votes right now to pass TrumpCare, and he knows it. He knows he needs more time.

More than anything, this move is a real clear sign that local Indivisible pressure is working.

McConnell’s move also signals he’s not letting TrumpCare die.Yes, support for TrumpCare is weak in the Senate right now, but with this move McConnell is declaring just how serious he is about twisting whatever arms he needs to pass this legislation.

In short, he think that with a couple extra weeks he’ll be able to get the vote he needs. He’s giving himself more time to buy off holdoutsand more time to let other scandals take over the news cycle to distract the American people while he tries to shove this bill past the finish line.

But we won’t let him get away with that. 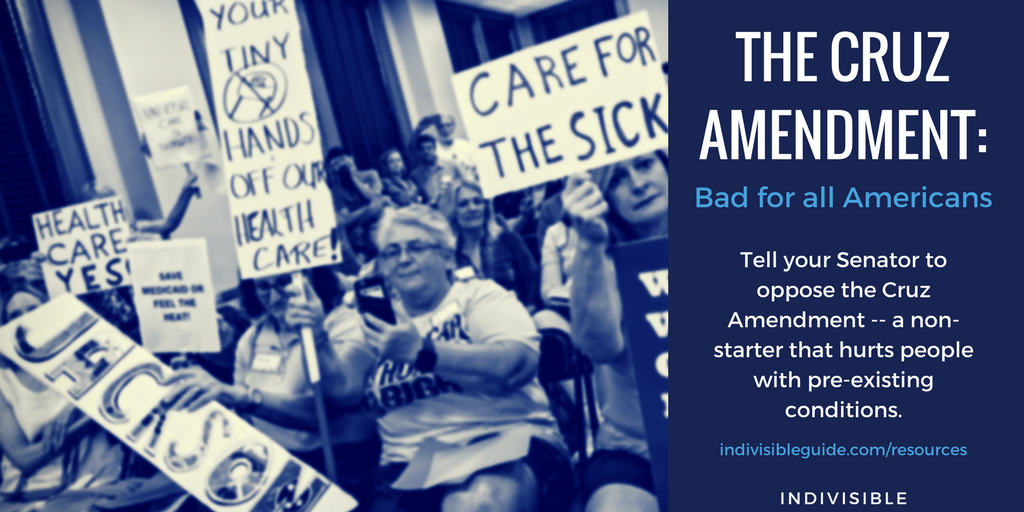 McConnell will do anything to get TrumpCare passed. McConnell is entertaining a longer Medicaid expansion phaseout, more funding to combat the opioid crisis, and extra help to certain states — but taking away and then giving back two weeks of August recess is perhaps the most persuasive ace McConnell has up his sleeve.

McConnell is using his tools, so we have to use ours. McConnell is a savvy legislative strategist. With this August recess delay, he is using his control of the Senate calendar to pressure Republican Senators. He knows that the smell of jet fumes in the air before a long recess will make a Senator want to agree to anything.

But McConnell doesn’t have all the power here. Local, defensive constituent pressure — the kind of pressure that Indivisible groups across the country have been applying for months — WORKS. We’ve forced McConnell to cut into August recess. And if this doesn’t work for him, he doesn’t have many more options.

Sure, McConnell is Senate Majority Leader — but we have the people on our side. We just have to keep up the pressure locally.

New resources to keep up local pressure on TrumpCare. We’ll continue pushing out all the materials you need to hold your members accountable. In the next few weeks, you can expect to see our analysis of the new CBO score (expected next week), additional explainers on new “compromise” proposals McConnell comes up with, and new daily call scripts for your key target Republican Senators.

McConnell would not delay the August recess if it weren’t for YOU. TrumpCare has been a Day One priority for Republicans and now they’re admitting that it will take them until at least AUGUST to get it done, if they get it done at all. This is once again YOUR constituent power in action. Let’s keep it up.