The Camarillo City Council blinked when it came to affirming “Black Lives Matter.”

On the bright side, the community has a list of districts that need new, better, councilmembers!

From an alert observer:

“I have almost reached the regrettable conclusion that the Negro’s great stumbling block in his stride toward freedom is not the White Citizen’s Counciler or the Ku Klux Klanner, but the white moderate, who is more devoted to ‘order’ than to justice; who prefers a negative peace which is the absence of tension to a positive peace which is the presence of justice” Dr. MLK

Last night Kevin Kildee, Tony Trembley, and Charlotte Craven were the white moderates who failed miserably at acknowledging the trauma and pain of the Black community. It was painful to observe white discomfort being protected while silencing the voice of Black people.”  A watered-down version was passed instead.

Camarillo City Coucilmember Charlotte Craven published this article erroneously stating that, at their meeting on June 10th, fellow Councilmember Susan Santangelo proposed to “defund” the police department. Craven is asking her followers to send in letters opposing both these propositions and the local GOP is jumping in right behind her, publishing a list of unsubstantiated talking point facts.

Councilwoman Susan Santangelo NEVER mentioned “defunding the police” in the council discussions. No matter your stance on this, the bottom line is that Craven is using that phrase as a way to justify NOT reviewing the local Police Contract the city has with the VC Sheriffs – which is nearly 50% of the city budget ($18M). (VC Cities – police budgets) It is gross negligence NOT to scrutinize such a large portion of the budget and the contract that dictates that much spending, ESPECIALLY in the time of COVID and economic distress. Do not let her use this whistle to dilute the ACTUAL call to action: Review the contract! Without getting that first step passed by the council, there can be no reform in the coming months. 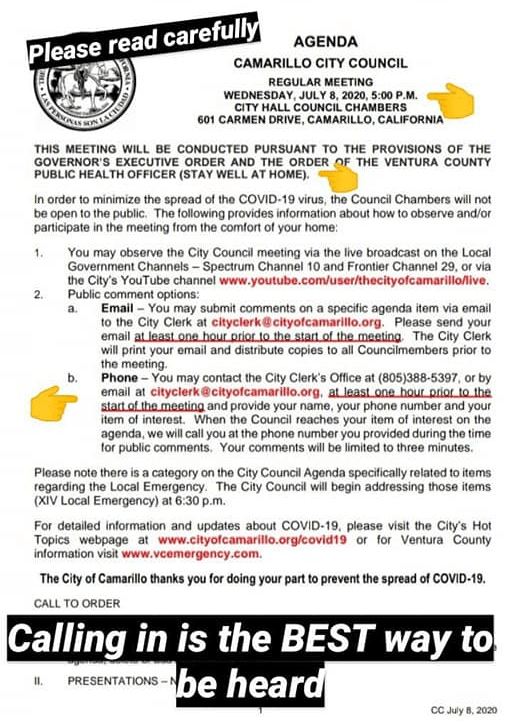 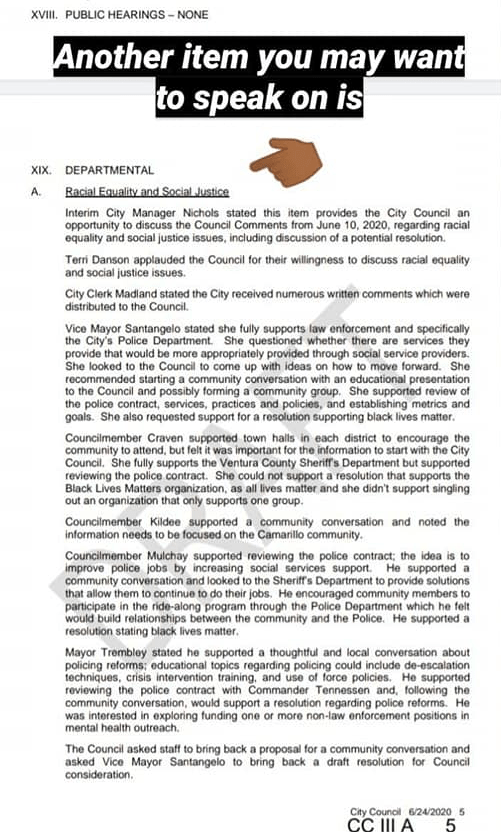 Mar 4 – Online: The New Jim Crow: Mass Incarceration in the Age of Colorblindness

Mar 5 – Online: Making African America: A Symposium on Immigration and the Changing Dynamics of Blackness (Day 1 of 6)

Probably canceled due to Covid concerns. See you (hopefully) soon, but please check back for verification – in the meantime please call El Concilio @  805-486-9777 – Free IMMIGRATION LEGAL AID Fair – Volunteers Needed! Every last Sunday of the month we assist residents, alongside immigration lawyers, in filling out paperwork for citizenship, DACA (click here for up-to-date DACA info) and green card renewals. Can’t make it? Help fund this event